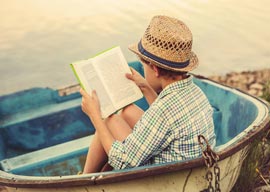 Last week I was irritated to receive an e-mail from the British Medical Journal asking me what I thought of its new format. What I thought of it was unprintable; and now that we know that e-mails are as permanent as the Rock of Gibraltar, I thought it wiser not to answer.

The Journal claimed that it had canvassed its readers over the past six months and they had said that they were too busy to read anything in depth. What they wanted, apparently, was fewer words and more pictures, something easier to digest, namely things that were predigested for them. They didn”t want entire scientific papers; rather “something they could dip into quickly to find the information they needed.” The British Medical Journal was ready to oblige, and the result resembled a kind of Hello! magazine for doctors.

It is true that doctors are busy (often with bureaucracy imposed upon them that is at best only tangentially related to the treatment of patients, and usually not even tangentially); and it is true also that they need authoritative digests of the latest research, for no one has the time, let alone the capacity, to keep up with all but the tiniest corner of modern scientific research. Despite this, however, I could not help but feel that the transformation of the British Medical Journal into an organ of infotainment was an act of cultural vandalism, akin to the deaccessioning of books by public reference libraries because no one has requested to look at them for the past twenty years. The reference library is no longer to be regarded as a repository but as a shop, in which only the items most frequently called for are stocked; and on this pretext libraries everywhere have rid themselves of incalculable riches.

In defense of the British Medical Journal, it will continue to publish proper scientific papers, though only online. Anyone sufficiently interested will still be able to consult the full version of a paper instead of the predigested summary version that will appear in the printed version of the journal. But that, I suspect, will mean that most doctors will lose all awareness of the complexities and ambiguities of scientific research, since they will not in fact ever look at an entire paper and notice its deficiencies or the fact that its conclusions are not watertight. Instead, their minds will be full of definitive answers supplied by someone else. They will not only lose the habit of thinking for themselves, they will lose it without any awareness that they have lost something.

Doctors are in the top 1 or 2 percent of the population from the point of view of intellectual ability, yet they want fewer words, more pictures, and something they can dip into rather than immerse themselves in: anything, in short, that does not require either concentration or commitment of time. It is as if information technology had acted on their minds as a food mixer acts on cooked leek and potato, turning them into soup.

It is a commonplace that information technology is destroying our attention spans. You see signs of it everywhere. People can”t even concentrate on a conversation anymore, but seek distraction by, with, and from their telephones. The grass is greener on the other side, and the next screen page or text message will always be more interesting than the last. I am not more than averagely boring to talk to, yet I find people increasingly look at their telephones before I have even finished a sentence.

A whole page of print now intimidates many people, and not just the type of people whom a page of print has always intimidated; at a Paris airport there was, until two or three years ago, a very good bookshop, but it has now been replaced by a pharmacy. It is not that passengers read books that they have downloaded on their electronic devices; on the contrary, they play games or watch films on them, or leaf through glossy magazines in a desultory way. And literary pages in French newspapers and magazines now review comic-strip books with as much seriousness as any other type of book. Adults are the new children.