A Rebel Yell for the Colonel 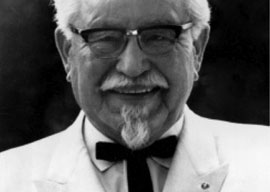 Trayvon. Bernanke. The Colonel. America is buffeted by blustery winds of change these days, yet who among us would have thought even they could disquiet the solemnity of the buffet table?

Recently it was announced that the venerable gentleman in the white suit and string tie would be phased out of our collective consciousness. KFC, formerly Kentucky Fried Chicken, is erasing the Colonel from its advertising and some establishments. Has there ever been a greater corporate betrayal? (Well, yes; but probably nothing similar where chicken breasts are concerned.)

Harland Sanders has always been something of a hero of mine. Not because he managed to hit on just the right blend of essential herbs and spices, but because as far as sheer tenacity and the grit of making it through life goes, he is a model for us all.

The Colonel was born not in 1790, as producers of Little House on the Prairie would have you believe, but in 1890 to a dirt-poor family in rural Indiana. During his infancy his father was severely injured, ending their farming life. The patriarch became a butcher for a few years but soon caught fever and died. Eldest child Harland became man of the house (at age 5) until his mother married a stepfather who beat him. By 12 he left school and subsequently left home.

“Harland Sanders has always been something of a hero of mine.”

At 15 he did what many patriotic boys have done”he lied about his age to join the military. Sanders became a mule-handler in Cuba until he completed his commitment. Incidentally, he was never a military colonel but received the meritorious distinction from the state of Kentucky, as has one of my own close relations (though mine has not yet grown a goatee).

Next came a series of odd jobs Ã  la O. Henry that saw Harland as steamboat pilot, insurance agent, and railroad fireman. Getting married at 20 seemed to settle him down, but his wife cut out when Sanders was fired for insubordination while on a business trip.

His spouse was so serious about abandoning him she did it the old-fashioned way by discarding all his belongings and running off with the children. Her brother diplomatically wrote Harland that he was “no-good” and a “failure” because he couldn”t hold a job. The couple reconciled for a time but ultimately divorced.

By his mid-30s Sanders was a man with little formal education, an unhappy home life, and whose rÃ©sumÃ© could boast only a string of short-term employment. He became a traveling salesman for Michelin Tires but had an accident in which his head was split open and he lost his new car with entire stock of wares during a torrential downpour.

My day is ruined after a flat tire. Putting my automobile in a river? Watching it float away? With almost everything I own inside? I”d prefer to sit down and choke on a chicken bone, but not Harland. After watching this tragi-comedy unfold he had a good laugh, got back on his feet, and walked into town to borrow some clothes to wear while making his comeback.

It was once said that “If you want to see America, buy a gas station,” and this is what Sanders did next. In 1930 his service station in small-town Kentucky was providing car care, refreshments, and most importantly for posterity, chicken dinners. But it didn”t quite begin as well as it sounds. When he opened Sanders had no actual restaurant, so he served the dinners in his personal rooms.

Over the next decade the chicken recipe was perfected and business grew. However in 1956 when the interstate system reached him it completely bypassed the Sanders CafÃ©. He was forced to sell out and received barely enough to cover his debts and taxes. Everything was gone and Sanders was 65 years old.

Instead of surrendering, Harland franchised his recipe for chicken to a man in Salt Lake City. When this first effort proved profitable Sanders went on the road, putting a wealth of experience to use selling chicken (and himself) to franchisees across the country. By 1963 he had 600 of them.

You more or less know how things ended from there. But then, everyone always knows the ending. It’s the beginning that counts most since that’s the part of these stories so often untold because they”re depressing beyond mere words. It is also the most instructive for those of us who think we have seen difficult times ourselves yet who have really seen very little by comparison.