A Reluctant Warrior Tiptoes to War 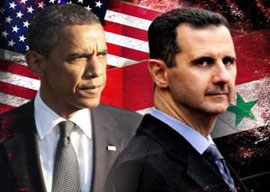 Barack Obama has just taken his first baby steps into a war in Syria that may define and destroy his presidency.

Thursday, while he was ringing in Gay Pride Month with LGBT revelers, a staffer, Ben Rhodes, informed the White House press that U.S. weapons will be going to the Syrian rebels.

For two years Obama has stayed out of this sectarian-civil war that has consumed 90,000 lives. Why is he going in now?

The White House claims it now has proof Bashar Assad used sarin gas to kill 100-150 people, thus crossing a “red line” Obama had set down as a “game changer.” Defied, his credibility challenged, he had to do something.

Yet Assad’s alleged use of sarin to justify U.S. intervention seems less like our reason for getting into this war than our excuse.

For the White House decided to intervene weeks ago, before the use of sarin was confirmed. And why would Assad have used only tiny traces? Where is the photographic evidence of the disfigured dead?

“When did Congress authorize Obama to take us to war in Syria?”

What proof have we the rebels did not fabricate the use of sarin or use it themselves to get the gullible Americans to fight their war?

Yet, why would President Obama, whose proud boast is that he will have extricated us from the Afghan and Iraq wars, as Dwight Eisenhower did from the Korean War, plunge us into a new war?

He has been under severe political and foreign pressure to do something after Assad and Hezbollah recaptured the strategic town of Qusair and began preparing to recapture Aleppo, the largest city.

Should Assad succeed, it would mean a decisive defeat for the rebels and their backers: the Turks, Saudis and Qataris. And it would mean a geostrategic victory for Iran, Hezbollah and Russia, who have proven themselves reliable allies.

To prevent this defeat and humiliation, we are now going to ship arms and ammunition to keep the rebels going and in control of enough territory to negotiate a peace that will remove Assad.

We are going to make this a fair fight.

What is wrong with this strategy? It is the policy of an amateur. It treats war like a game. It ignores the lessons of history. And, as it continues a bloodbath with no prospect of an end to it, it is immoral.

What is the likely reaction to our escalation from humanitarian aid to military aid? Counter-escalation. Russia, Iran and Hezbollah are likely to rush in more weapons and troops to accelerate the progress of Assad’s army before the American weapons arrive.

And if they raise and call, what does Obama do?

Already, a clamor is being heard from our clients in the Middle East and Congress to crater Syria’s runways with cruise missiles, to send heavy weapons to the rebels, to destroy Assad’s air force on the ground, to bomb his antiaircraft sites.