A Royal Disaster on Canvas 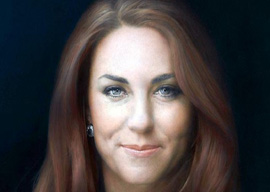 Like all English royals who ever lived, Kate Middleton is only as handsome as nature made her”no more, no less. The fact that she has wrinkles under her eyes, that her nose flattens crudely into her forehead, that her chin lacks refinement, that she can only produce a wry smile, and that she is decidedly less than “stunning” has nothing to do with the catastrophic failure of Paul Emsley’s official portrait of her.

In the hands of a competent painter, such attributes would have been exploited as elements of charm, something the Duchess of Cambridge possesses in abundance.

The portrait’s real problem stems from a false modernist concept of realism. Like most of today’s academic realists, Emsley has reduced portraiture to the dead mechanics of the photocopier, the artist’s brush to a toner cartridge. Today’s realist painters are soulless machines, capable of reproducing flesh and wrinkles and strands of hair, but utterly powerless to seize a subject’s essence.

Dead realism and abstraction both turn their backs on reality’s fullness.

“Instead of a portrait, Emsley has produced an overblown mug shot.”

Good taste retired from Albion’s shores at the marriage of Charles Windsor and Diana Spencer”some would say well before then, as far back as the 1950s when Elizabeth II transformed the monarchy into a TV reality show. The English ceased to cultivate the arts when Henry VIII delegitimized his throne by placing it above the one Jesus had given to Peter.

Consider that the black-garbed, grim-faced, and serially divorced Puritans are doctrinally iconoclastic. Art, especially good art, has always been their enemy”witness the desecration of statues at Utrecht during the Beeldenstorm of 1566, the work of hardcore Calvinists who would later spread their proto-communist rot to America’s eastern shores.

Whatever England had of culture after the Reformation has been either borrowed or purchased from the Continent. It is therefore impossible that a modernist such as Emsley should understand the charm of portraiture. For him, the English eighteenth century, with its glorious Gainsborough and affable Reynolds, is a stale museum, not a vibrant school full of useful lessons for portraitists of any age.

Art, the eternal mirror of the human soul, can only reflect modern life’s lack of charm. Emsley’s canvas is essentially empty: He even managed to remove the Kate from his Duchess of Cambridge.

The mere photographic copying of nature cannot make a portrait worth viewing. The best paintings playfully expose their own underlying illusion in a self-conscious manner, as if to say: “Look at me, I am art.” However accurate the brush may become in rendering things real, it must always retain a sense of the human hand that holds it, the personality and genius of the artist, his every gest enshrined in the strokes.