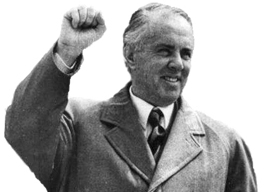 The Albanian dictator, Enver Hoxha, who died in 1985, has played only a very small part in my life. In my student days I knew a few youthful admirers of his; and some twenty years later I was acquainted with a bookseller who believed that he, Hoxha, had been the only true Marxist-Leninist in the world (apart from Lenin himself, of course). The bookseller hoped to foist copies of Hoxha’s voluminous memoirs onto a public whose unwillingness to buy them he, the bookseller, ascribed to ideological underdevelopment. I have from time to time read a few pages of one of Hoxha’s books and was forcibly impressed by the quality (and quantity) of his vituperation. Hoxha was a horrible man, but not even his strongest detractors could accuse him of having been mealymouthed towards those whom he deemed his enemies.

I also visited Albania in the days of his successor, Ramiz Alia. The personality cult persisted, as if nobody could be quite sure that Hoxha was really dead and feared he might return, his purported death being but a ruse to uncover those who worshipped him only through fear and not because they loved him in their hearts. The name ENVER was inscribed in large painted white stones on the sides of hills, and it was not advisable to ask, even in jest, “Enver who?”

The word unforgettable is overused, no doubt, but Albania in those days really was unforgettable. The tops of the posts in the vineyards were provided with metal spikes to impale invading parachutists, there was one concrete gun emplacement for every four inhabitants of the country, and by night searchlights scoured the coast for traitors trying to flee from their compulsory happiness. The official policy of the country was paranoia; it was its religion, in fact, all other forms of religion having been abolished.

“To call Hoxha a monster would be to libel monsters.”

Once you have visited a country like Albania under such a dictatorship, you can never entirely lose your interest in it; you are enthralled for life. And therefore, as soon as I knew that a biography of Hoxha, by an Albanian journalist, Blendi Fevziu, had been translated into English, I knew that I had to read it. Its title was Enver Hoxha: The Iron Fist of Albania, and it did not disappoint me. I read it in two sessions, one at night and the other the following morning. I slept only four hours, half my usual ration, being subconsciously eager even in sleep to read the rest of it.

To call Hoxha a monster would be to libel monsters. His perfidy knew no bounds; he was as conscienceless as it is possible for a man to be. He executed the majority of his associates, most of whom were deeply implicated in his crimes. This makes it difficult, sometimes, to know whether or not to feel sorry for them, for Albanian communism was from the first, even before it came to power, ruthless and totally without normal scruple; and those of his colleagues whom Hoxha had tortured, killed, imprisoned, or exiled in inhuman conditions must have known this. Their only possible objection to the treatment they received could have been that they did not deserve it, unlike the others whose torture, death, or exile they had acquiesced in or connived at.

When we read, then, that Liri Belishova, whose first husband committed suicide or was murdered during a purge in 1948, consented to return to the Politburo when he was rehabilitated for a reason just as arbitrary as that of his purge had been, we know that we are not reading of a moral giantess; for similar hideous crimes were committed while she was at, or near, the pinnacle of power. She was purged again, however, in 1960, this time until the end of the regime. She was forced to work under atrocious conditions; she was not permitted to remain at the deathbed of her daughter, aged 23, as she, her daughter, died of cancer in 1981. She was kept in exile for thirty years. Perhaps this explains why she was one of the few communists after communism’s downfall in Albania to offer an apology for what the communists had done. But surely there are crimes beyond atonement, and what the communists did in Albania is one of them. You cannot claim suddenly to realize that mass murder and the most vicious oppression are wrong.