A Sad Estate of Affairs 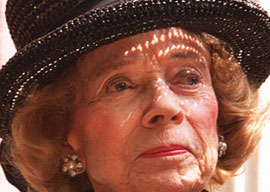 Today at 2:30PM, philanthropist Brooke Astor’s son Tony Marshall is expected to be sentenced to one to three years for…uh, I can’t seem to get a straight answer on what he did wrong.

The New York Post acts as if his crime is pilfering his mother’s inheritance and abusing her, but the actual charge seems to be that he gave himself a raise as an executor of her will. The raise was $1 million, and if you have power of attorney”which he did”it appears to be legal, but the media has sculpted a narrative depicting Marshall and his wife as pigs at the trough. The sentencing has been just as convoluted as the trial. There appears to be an endless list of judges deciding Marshall’s fate. One claims Tony is too sick to go to jail. Another says that a juror’s recanted testimony changes everything. The main judge on the case seems to want to throw the book at Marshall.

I know an insider who has been intimately involved in the case and what is most fascinating about this seven-year trial that has cost the Marshalls $11 million is how few questions the media have asked. They enjoy Photoshopping a snout on Marshall’s wife’s face, so why ruin the fun with facts? Why ask questions when the butler who said Marshall and his wife were the types “not to trust” is suddenly rewarded with extravagant Manhattan property? If journalism weren’t dead, this detail alone would be the scoop of the decade. 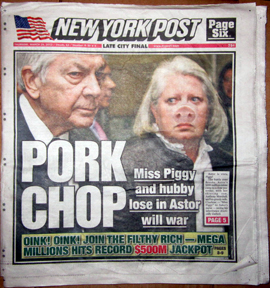 Journalism is dead, however, and I believe Tony Marshall is innocent. I think Anthony Dryden Marshall is an American hero. He is a war veteran with dozens of medals including a Purple Heart. Marshall worked with the Kennedy Administration. He was an integral part of the U2 project, a top CIA operative for three presidential terms, and an ambassador to several countries.

As of today, he is also the oldest person in New York to be sentenced to jail for a nonviolent crime. He is one of the top four oldest prisoners in New York. The other three were charged for murder, attempted murder, and sexually abusing four young girls, and none of them were sentenced at Tony’s age of 89. This is the kind of power a strong narrative can have. Tony is in a wheelchair and needs assistance going to the bathroom. He is a broken man and he’s broke. And for what?

“As usual with these things, the lawyers are the only ones who win.”

Marshall’s lawyers have been reluctant to allow Marshall or his wife to talk to the press. They made a lot of money defending him, and it’s quite possible they enjoyed him being unable to make his case outside of their parameters. Now that it’s become clear Marshall has lost, people are ignoring orders and starting to speak. Last week, juror Judi DeMarco signed an affidavit saying she was coerced. Gen. James F. Amos, the Commandant of the Marines Corps, sent a letter to the president on Wednesday saying how outraged he is by the verdict. Justice activist Kevin McKeown set up an interview with The Today Show on Tuesday and more will follow soon. Amid this week’s chaos, Marshall himself seems to vacillate from suicidal to furious.

The following is an interview with an insider who has known Tony since the early 90s and has been intimately involved with the case since it began. He has chosen to remain anonymous, and his opinions are his alone.

GAVIN McINNES: The public’s perception of this case is that Tony Marshall took advantage of his dying old mother and tried to hog the inheritance.
ASTOR SCANDAL INSIDER: Couldn’t be farther from the truth. As far as I’m concerned, what’s really going on is Marshall’s son Phillip got together with David Rockefeller and hatched a plan to hijack the estate by pretending Tony was out to get it. The way I see it, Phillip started this whole thing, but he got duped by smarter hustlers in the process.

Brooke Astor wasn’t living in squalor and she wasn’t abused?
If living in the top two floors of 778 Park Avenue is squalor and having half a dozen full-time servants is abuse, I’d like to be subjected to both.

So the narrative is: A greedy rich guy (Tony) is out to rob his sweet old mother (Brooke), but [you say that] the truth is it’s a greedy rich kid (Phillip) out to rob his sweet old dad (Tony).
Tony is not a bon vivant who goes sailing around the world attending wine tastings. Maybe his sons are, but that’s not how he grew up. His last name is Marshall, not Astor. When he was eleven years old, his mother Brooke sent him on a transatlantic boat to a boarding school in Britain. Then it was straight to military school. After graduating from Brooks School, he lied about his age so he could enlist in WWII at age 17. What followed was one of the most decorated military careers in history. He led a platoon in the battle of Iwo Jima and took a grenade in the leg. Can you imagine some of the people involved in this case lasting ten seconds in that battle? He’s not a swindler. He’s an old war vet.