A Safe Christmas for Christians in the Holy Land 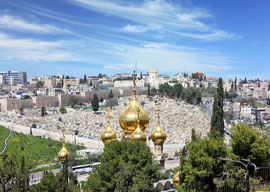 This Christmas our thoughts need to be with our fellow Christians who are being threatened in the biblical lands. No ifs or buts about it, they are being told to either join the Sunni-led opposition to Assad and renounce Christianity or die. After decades of protection by a secular-leaning dictatorship, the Saudi-financed jihadists are giving ultimatums for a very dark future for Christians. There already has been Christian cleansing in Syria, especially in Homs, where 90 percent of the Christians have fled the city for Assad-controlled areas near the Lebanese border.

In Iraq things are not much better. Cities such as Mosul and Tikrit, which is near Saddam’s hometown, were once vital centers of Christianity. No longer. Iraq’s Christian population, estimated to have been 1.5 million, has fallen by half. Thank you George W. Bush, a great Christian thinker, at least in Texas. In Egypt, there are at least seven million Christian Copts who are now treated as third-class citizens and mostly confined to squalid quarters. Things have improved in Egypt since the overthrow of the Muslim Brotherhood gang, but rest assured that if the Salafists have their say, and they still do with the military in power, the Christians are doomed in the long run.

“This Christmas our thoughts need to be with our fellow Christians who are being threatened in the biblical lands.”

Turkey and Saudi Arabia, fuggedaboutit where Christians are concerned. What I don’t understand is how we—Americans and Europeans—can sit comfortably in our ivory towers and dispense wealth to these crappy countries while their leaders and religious fanatics persecute people who believe in our Lord Jesus. Once upon a time Saudi Arabia’s Mecca and Medina had a thriving Christian and Jewish population. But centuries ago, when a single gunboat could have forced the camel drivers to lick our boots and keep licking them until the last Jew or Christian was safe, they were finished off. In Lebanon, the West’s hypocrisy is even more blatant. A Christian majority is so threatened by Sunni (read Saudi) fanatics, some Christians are reaching out to Hezbollah’s Shia in a desperate hunt for allies. The London Spectator has been unsparing in pointing these horrors out, and articles by Ed West and Douglas Davis have pinpointed the grotesque facts that Christians are being targeted by the Sunnis.

But I have yet to hear Obama or Cameron stand up and announce that the next time a Christian is slaughtered for his beliefs, no Saudis will be given visas to visit their whores and palaces in the US or Britain. And while I’m at it, why don’t the EU fat cats demand the Qataris and the Saudis (who are financing the jihadists) pay for the millions Europe will have to spend feeding and housing the hordes of Syrian and Libyan refugees escaping to our shores? Is it any wonder no one in their right mind believes a word our politicians tell us when they see how weak and powerless our leaders are when facing religious fanatics? In the Big Bagel, people went bananas because the wife of some towelhead leader of Qatar purchased Francis Bacon’s triptych of one of the world’s biggest turds, Lucian Freud, for 142 million big ones.