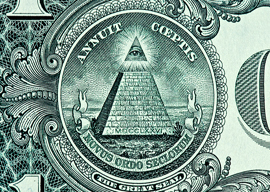 Wallowing in their feelings of superiority over the tinfoil-helmet brigade, the enlightened establishment enjoys tittering over right-wing bumpkins who supposedly believe in conspiracy theories.

With apologies to Richard Hofstadter, I don’t think the right has a monopoly on conspiracy theories.

I figure the smug chuckling among the Puffington Host crowd is an exotic manifestation of projection analogous to the way cheating housewives are always first to suspect their husbands are up to no good. Whatever the source, a taxonomy of their crazy ideas is in order.

Liberals believe that a male conspiracy prevents women from excelling in mathematics and the hard sciences. The reason that no woman in all of human history has invented the transistor radio or the C compiler (we can blame a chick for COBOL) is attributed to sexist conspiracies. The fact that there are fewer lady physicists than man physicists is attributed to sexism by people with Ph.D.s in physics. People who are presumably familiar with the concept of standard deviation and mean can’t understand why a sample population with a larger observed standard deviation in intelligence has more outliers. They consider an invisible and pervasive sexist conspiracy to be a more reasonable explanation.

There are very serious penalties for even expressing mild acknowledgement of biological facts about the sexes in the modern workplace. How is the sexist cabal supposed to conspire to keep the dames from excelling at mathematics and computer nerdery? Though I am an awful sexist man-pig for noticing these things, I’ve happily worked with the woman physics and computer nerds I’ve come across, and I”ve even tried my best to pump up their self-esteem and help them in any way I can. No group of fellow man-pigs has ever so much as hinted of the conspiracy’s existence to me, let alone given me the directives for how to keep chicks down. Yet we are all required to believe in the conspiracy’s existence to the extent that speech codes and campus witch hunts are the norm. If they get their way, the liberals will insist on equal outcomes in higher scientific education, which will be the end of American science.