A Silent Boo for the Good Professor 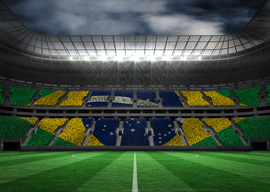 Sociologists often talk or write nonsense. Sometimes they dress up the bleeding obvious in pretentious language. Sometimes they merely seem determined to demonstrate that they are more intelligent and understand things better than the rest of us. And sometimes this makes them seem fools or greater fools than perhaps they may be. The Olympic Games offered a nice example of sociology-speak from one Peter Kaufman, associate professor of sociology at the State University of New York.

It was provoked by the booing of the French pole-vaulter Renaud Lavillenie by a number of Brazilian fans. He was competing for the gold medal against the Brazilian Thiago Braz da Silva, and found the booing to which he was subjected distressing. It may”I don”t know”have affected his performance. At any rate the Brazilian won gold, the Frenchman silver, and afterward Lavillenie compared the Brazilian fans to Nazis booing Jesse Owens at the 1936 Berlin Games. This was a bit over-the-top, and indeed Lavillenie later apologized for making the comparison. Fair enough, you may say; end of matter.

However, up stepped the brave professor to put Lavillenie right, and to complain of what he called “the backlash towards the home fans.” “I find it interesting,” he said, “that people are not looking at the fact that crowd behavior is a matter of cultural values. Why,” he asked, “is the way Brazilians cheer or jeer “wrong”? What we know as reality is shaped by the environment we grew up in. Academics regard jeering as a form of social interaction.”

The Olympics, he tells us, “have a much broader meaning””than what?””and when Brazilians boo they might actually be defying authority rather than only trying to influence the outcome of a match.”

Well, I suppose it’s just possible that when they boo a French pole-vaulter they are really expressing their dislike of their own government, but if you believe that, you probably can get yourself a job teaching sociology. Those of us not gifted with the good professor’s insight would have had no doubt that the Brazilian fans were trying to upset the Frenchman, disturb his concentration, affect his performance, and help secure victory for their own Brazilian hero.

Still, the professor is, I”m happy to say, a generous and understanding fellow. Asked if the victim of booing”which in other circumstances he might define as “verbal abuse””mightn”t quite reasonably be upset, angered, or distressed, he replied:

The targets of booing can be excused for feeling offended, sad, or even threatened by a raucous crowd. We can”t blame them for not having time to think of cultural aspects when they are more worried about sporting performance.

No doubt if Renaud Lavillenie had had the benefit of Professor Kaufman’s schooling he would have shrugged his shoulders, said “It’s just their culture,” and gone on to win gold. Perhaps, thanks to the professor, he”ll know better and do better next time.

Still, friend Kaufman wasn”t finished yet, not by a long chalk.

“It’s understandable that the French athlete got upset, but he was competing against a Brazilian athlete in front of a home crowd. It was inevitable that the fans would pick on him.”

Our sociologist seems to have a low view of human nature. It’s not inevitable at all. It may sadly be common in some sports and some places, but inevitable it isn”t. It was long the convention in rugby union that the crowd observed silence when a player was taking a kick at goal. This convention is now often disregarded. It’s disregarded in France and, I”m sorry to say, in Edinburgh, but not everywhere. In Dublin there is almost always complete silence when a player from either team is lining up a kick at goal. Even when a successful kick might cost Ireland the match, the crowd falls silent. You could, as they say, hear a pin drop. It’s a matter of good manners and of respect for the conventions and the spirit of rugby. An Irish crowd is as passionate as any, but it knows how to behave.

Still, our sociologist will have none of it. He has no sympathy with calls for crowd behavior to be curbed.

“Sport is passionate and exciting,” he says. So indeed it is; we may all agree on that and wouldn”t wish it to be otherwise. But he tells us that we must understand that “people are making political statements.” Well, sometimes, doubtless, they are. He gives two examples.

“First, he says, “Brazilian fans booed Russian athletes because of the doping allegations.” Perhaps that was indeed why they booed. I”ll take his word for it. Nevertheless it was still unfair, because all the Russian athletes who competed in Rio had been cleared to do so by the various Olympic committees and were therefore entitled to compete. Then it was nasty because there was no good reason to hold individual athletes responsible for the sins of other athletes or state-sponsored doping. Some of the individual Russian athletes, who natural justice requires us to consider innocent of wrongdoing, were visibly distressed by the reception they got, and their performance suffered. But the professor approves of what he considers to have been “a political statement” directed nastily at individuals. I think he’s wrong and foolish to do so.

The second political statement of which he approves was made by Brazilian fans who “picked on Argentine fans because of the soccer rivalry between the two nations.” Well, this is more understandable and arguably acceptable, but intense rivalry doesn”t mean that there aren”t proper limits to what is appropriate. I have sat beside English supporters at Scotland-England rugby internationals without feeling the need to insult or abuse them”and vice versa. There are right ways and wrong ways to behave.