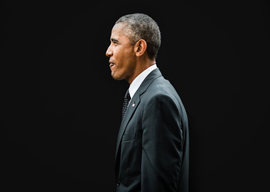 Six years after he was first elected President of the United States, Barack Obama remains something of an enigma to the public he presides over.

Ironically, this isn”t due to the President being particularly reticent about himself. After all, judging from his two books, the subject Obama finds most enthralling is Obama. For example, Obama’s 2012 eulogy for Senator Daniel Inouye (D-HI), the Japanese-American war hero, used 48 first person pronouns or adjectives (such as “I,” “me,” or “my”) to recount how the young Obama had noticed Inouye on TV.

Understandably, Obama hasn”t been in any hurry to answer his political opponents” questions, toying with them for years over his birth certificate. Meanwhile, few of his supporters have felt much urge to ask him the detailed questions about his background that he”d probably love to expound upon at length. As Obama has explained, being a “blank screen” upon which voters can project their political fantasies has its advantages.

One reason for this obscurity is that aspects of Obama’s personal background are genuinely exotic to almost all Americans, which limits the quality of questions. For example, Obama’s Indonesian connections”as a child he lived in Jakarta from 1967-1971, shortly after the notorious massacre of Communists and Chinese; then in the 1980s Obama came fairly close to marrying a wealthy Australian woman with striking family ties to the highest circles of power in Indonesia—are perplexing to even the best-informed Americans.

Indonesia is an immense country (current population: a quarter of a billion), but it’s culturally remote from America. For instance, there are almost no prominent Indonesian-Americans (the Van Halen brothers, who are one-quarter Indonesian, may come closest). Movies about Indonesian history well-known in the West are limited to two curious ones about the downfall of the leftist ruler Sukarno in 1965 and the subsequent slaughter of Communists: The Year of Living Dangerously and last year’s documentary The Act of Killing.

Democrats, even Obama, don”t find Indonesians terribly interesting. It’s impossible to imagine Obama achieving anything in Democratic politics if he had not suddenly switched in the mid-1980s from what his friends called an “international” or “multicultural” identity to being Our First Black President.

“It’s impossible to imagine Obama achieving anything in Democratic politics if he had not suddenly switched in the mid-1980s from what his friends called an “international” or “multicultural” identity to being Our First Black President.”

And Republicans have generally found Indonesia a frustrating dead end in tying Obama to Islam or Communism. For example, the President’s stepfather, Lolo Soetoro, child of a wealthy Indonesian family, eventually died of liver failure at age 52, which doesn”t suggest he was terribly devout about abstaining from alcohol.

Lolo worked for an American oil company because his brother-in-law was a high official in General Suharto’s regime that had marched to power in 1965-66 over the dead bodies of hundreds of thousands of its leftwing opponents.

Likewise, Obama’s mother’s first job in Indonesia was at the American embassy.

The CIA/Ford Foundation policy tended to be to try to attract everybody in the Third World even slightly to the left of Che Guevara. (I wouldn”t be surprised if Obama’s maternal grand-uncle, a Ph.D. named Ralph Waldo Emerson Dunham, who worked for the Naval Personnel Research agency on the ultra-confidential Polaris submarine missile project, had vouched for his niece her being a good Jayhawk Unitarian liberal.)

She went on to a long career in Indonesia and Pakistan with the Ford Foundation, which during the Cold War served as the NGO avatar of the liberal American Establishment’s soft power. Inderjeet Parmar writes in The US Government, Citizen Groups and the Cold War: The State-Private Network:

For example, in Indonesia, where “anti-American” popular and government feelings ran high in the 1950s and 1960s, the Ford Foundation played a vital role in building key educations institution with an underlying pro-western philosophy favoring capitalistic modernization and development strategies.

And that sounds like the President’s mom’s career, which eventually focused upon promoting microfinance for women entrepreneurs.

A major American nerve center for waging the Cold War in Asia was the East-West Center at the University of Hawaii. Janny Scott writes in her bestselling biography of the President’s late mom, A Singular Woman:

The summer Ann arrived in Hawaii [1960], Congress appropriated $10 million to set up the East-West Center, an institution that more than any would go on, over the next twenty-five years, to influence the direction of her life.

Lolo, an Indonesian Army officer, had arrived in Hawaii on an East-West Center grant in 1962.

Similarly, Barack Obama Sr. had gotten to the U. of Hawaii on another Cold War ploy, the Tom Mboya Airlift of promising African students to American universities. When Barack Sr. got back to Kenya, he too worked awhile for an American oil company. Although his ideological sympathies tended to be with the pro-Soviet Luo tribal leader Oginga Odinga, his all-important personal connections were with the pro-American Luo labor leader Tom Mboya.

Patrick J. Buchanan’s new book The Greatest Comeback recounts accompanying Richard Nixon to a 1967 meeting in Kenya with Mboya. Nixon and Buchanan were impressed by Mboya, but also picked up the impression that Mboya was perceived as too pro-Washington to make it all the way to the top in the rough world of Kenyan politics.

“And Tom Mboya never did,” Pat writes. After Mboya was assassinated by a Kikuyu hired gun in 1969, the final witness called by the prosecution in the hit man’s trial was the dead man’s protÃ©gÃ©: Barack Obama Sr.

One of the more intriguing ties the President’s mother had in Indonesia was to Subud. Scott’s A Singular Woman recounts that Ann Dunham Obama Soetoro went to work for a Ford Foundation-financed English-language school at the end of the Sixties:

The school … had been started several years earlier … with the intention of helping build an Indonesian elite. … In 1970, the Ford Foundation made the first in a series of grants to the institute … She was looking for teachers. A half-dozen of them accepted her invitation, many of them members of an international spiritual organization, Subud, with a residential compound in a suburb of Jakarta.

Mohammad Mansur Medeiros, a reclusive and scholarly Subud member from Fall River, Massachusetts, and Harvard, whom Ann hired as a teacher, had immersed himself so deeply in Javanese culture, language, and religion that friends nicknamed him Mansur Java. Samardal Manan … used to listen awestruck and in silence, to Ann’s freewheeling conversations with Medeiros. “You would think they were in love, but they were not,” Manan said.

Founded by a Javanese aristocrat known as Bapak, Subud’s theology was a sort of “Coexist“ bumper sticker avant la lettre. You could believe in whatever religion you wanted as long as you practiced the addictive group exercise called latihan, a sort of Javanese equivalent of an est encounter session.