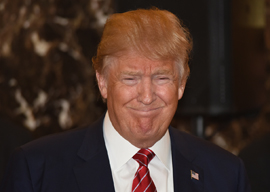 New York—I have never seen anything like it. If Adolf Hitler were running, he would match Donald Trump’s negative coverage. If Benito were in the race, his notices would be far more favorable. Once The Donald became the last man standing, some NY Times columnists became unhinged. One hysterical woman pundit accused Trump of…not having any money. The one I liked best was a colleague of hers who is usually unreadable because of his wordy and flat prose. That particular fool had declared that the word “Trump” would never appear in his column. Once Donny baby wiped the floor with his opponents, the fool did mention his name and described him as “an unbelievable joke.” One Washington pundit had vowed to eat his copy if Trump got past the first couple of primaries. He ate humble pie instead. The short little fat man who has never backed a winner except for the Iraq War (some winner), that mincing rat William Kristol, announced last year that Trump would drop out before the Iowa primary. Kristol’s predictions should be collected and distributed in schools. How to Always Get It Wrong and Get Paid for It should be the title.

In desperation, the Times came up with a Sulzberger buddy, amazingly also a mincing rat of a fellow, one Steven Rattner, a dishonest little chap who is not allowed to deal in stocks and bonds because he was caught doing something not kosher about five or so years ago. Banned for life by the SEC, he appealed recently but was denied yet again. Rattner wrote bad things about Trump and his taxes, but forgot to mention that Trump is allowed to deal in the stock market, while Rattner is not.

“Trump is a blue-collar billionaire who acts like a real person rather than the wind-up toys that posture inside the Beltway.”

Mind you, the lurid propaganda against The Donald is having the opposite effect. He is now being attacked about his attitude toward women. He likes them, ergo he must be a rapist of sorts. One desperado in The New Yorker, one George Packer—unfortunately for him not related to the Packer family of Australia—thinks Trump is the pits because he (Donald) is talking to white America, especially the less well-off. That’s a new one for me. Everyone talks to minorities in the land of the depraved, but Trump is the bad guy because he talks to the less well-off of the majority. See what I mean when I tell you the fourth estate is becoming unhinged?

The rise of Trump I did not foresee, although any clearheaded person should have. For entirely too long working-class people have been dismissed as not smart enough, their passion rooted in racism, guns, and beer. These same people have not had a raise in their standard of living since the Reagan era. In the meantime the wolves of Wall Street have all become billionaires, while none of the Goldman Sachs crooks and others of their ilk who caused the 2008 recession have gone to jail. So it was bound to happen, the awakening of the working-class white stiff who is now even told not to retain the silly old notion that single-sex, multiple-occupancy bathrooms and changing facilities should be entered based on a person’s biological gender as opposed to the one they imagine it to be. (Well, that suits me perfectly. I now need to find out where Keira Knightley’s locker room is located.)

Yep, the Republican race is over and the journalists lost big-time, but they refuse to admit defeat and they blame the American know-nothings for The Donald’s victory. Last week I went to a Republican Party meeting on the Upper East Side of Manhattan. The people were all well dressed, affluent, and old—and to a man (and woman) they were all for Trump. I was amazed. I would have thought the effete Jeb Bush was their type. And for the first time I felt that Trump might have a chance to win the whole thing in November. Sure, these people were Republicans, a minority in the city, but their distaste for the media was matched only by their dislike and distrust for Hillary. Perhaps the unfair coverage and stilted reporting against Trump by the major newspapers and the TV networks have had the opposite effect. To the extent that a man may be judged by his enemies, Donald Trump emerges as a very good man. Phonies like those of the NY Times and the Kristols of this world on TV have turned off a hell of a lot of Americans. Trump is a blue-collar billionaire who acts like a real person rather than the wind-up toys that posture inside the Beltway. The British media has not been left behind in its derision for Trump. In The Spectator two weeks ago, Petronella Wyatt called him a social climber. She should know. Her old man was the biggest climber in the U.K.

The Donald has not spent one red cent on polls in order to find out what people wish to hear. He is supremely self-confident and has a can-do mentality. America looks at the immigration disaster in Europe and suddenly Trump’s wall is not such a bad idea. In fact, it is a must. And keeping Muslims out is an even better one. I am starting to believe that The Donald has a chance. Yippee!