A Tale of Two Etonians 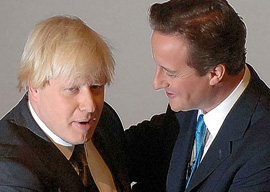 They are both Conservative politicians and both Etonians of the same vintage, yet they are almost permanently at odds. Would it not be better for the party to have coalition-government leader David Cameron and London Mayor Boris Johnson singing from the same hymn sheet? Could it even be achieved?

Politicians” nicknames are always good indicators of popular opinion. Margaret Thatcher became “Maggie” early in her premiership, possibly to counteract the vicious “Thatcher the Milk Snatcher” moniker. While the left spat out the word “Maggie” with hatred, her supporters used it to denote affection and support. “Maggie” was a woman of the people as well as the hated icon of the fight against statist socialism.

Coming to the two Etonians, we can see the difference: “Dave” is a dismissive reaction to Cameron’s attempts to present himself as an ordinary bloke, while “Boris” or even “BoJo” have an air of amusement and acceptance about them.

“Though Boris and David fixed their eyes on political careers from an early stage, they developed differently.”

Apart from appearance and mannerisms, David Cameron and Boris Johnson share a vaguely conservative outlook, though Boris presents himself as being more on the right, more euro-skeptic, considerably more pro-business and therefore less statist. But the distinctions are not great except in occasional rhetorical outbursts.

They also share a political ruthlessness and determination to rise “to the top of the greasy pole” (to quote that great Conservative Benjamin Disraeli). Cameron succeeded in becoming party leader and Prime Minister, but he failed to win the expected electoral victory in May 2010. Johnson has actually won an election and is politically ascendant. But London’s mayor does not have as much power as New York’s. Squeezed between Westminster”which regulates his power”and the boroughs that will yield as little as possible of theirs, the mayor can rarely achieve anything specific. But he has a big budget and a great possibility of patronage. Being in City Hall (irreverently known as the Great Glass Egg) provides one with a power base independent of party leadership. Boris has used that position to criticize, often indirectly, certain of the coalition government’s policies. He has called for greater support for the city and for London’s concerns regarding immigration. Neither he nor Cameron has much say over immigration as it is under the EU’s purview, but the appearance is one of Boris standing up for London and the city against his own leadership if necessary. With a little finesse this could be hailed as an almost Churchillian position.