A Toy Story for Grownups 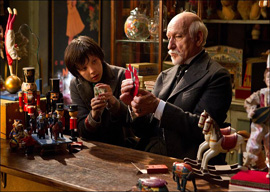 The movie industry’s clean little secret is that it could be even more vastly profitable if only the participants were as mercenary as they enjoy claiming they are in their self-satirizations. Instead, they are so selflessly generous they think it reasonable to hand $170 million to Martin Scorsese to make Hugo, a didactic 3D extravaganza intended to raise awareness among children of the need to preserve and study late-19th-century films.

Not only does the 69-year-old Scorsese direct superb gangster movies, he also makes documentaries about popular culture, teaches film appreciation at NYU, raises money to restore neglected masterpieces, and no doubt does much else that I lack the Scorsese-like vigor to look up right now.

Based on a graphic novel by Brian Selznick (a distant relation of Gone with the Wind producer David O. Selznick), Hugo begins with the Dickensian story of a young orphan in 1930 Paris who lives in the grand Gare Montparnasse, where he keeps the giant clock over the train station’s lobby running. He’s chased by a relentless but inept comic-relief Parisian policeman (Sacha Baron Cohen playing John Cleese playing Peter Sellers playing Inspector Clouseau).

“Scorsese’s new movie fearlessly tackles society’s most tragic problem: celebrities who become unpopular and have to get real jobs.”

The poor kid’s only pleasure is repairing a 19th-century automaton bequeathed by his father, whom he hopes had programmed the old robot to handwrite him a message.

For the antiquarian Scorsese, our unfamiliarity with automatons—first introduced to Europe 1,200 years ago when Harun al-Rashid, caliph of Baghdad, sent Charlemagne a precursor of the cuckoo clock—symbolizes the toll that decay and boredom have taken on our precious pop-culture heritage. Likewise, if digital formats change in some post-apocalyptic future, what if nobody bothers to convert Scorsese’s The Color of Money and Tom Cruise’s performance as a young pool hustler is lost forever? Scorsese has the energy to worry about stuff like this.

Scrounging for replacement gears, Hugo tries to a steal a windup mouse from a mean old man (Sir Ben Kingsley) who runs the toy store on the concourse.

Kids will be wondering what the orphan’s secret identity and special destiny are. Halfway through, however, Scorsese loses what little interest he had been able to muster in his fictional youngster and turns Hugo into a tribute to the resentful toymonger. You see—spoiler alert—the 69-year-old codger with the sour-grapes attitude is actually the great Georges Méliès!