A Traveler in Search of Tradition 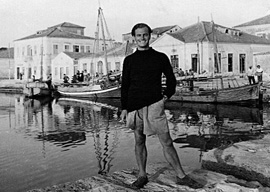 On December 9th, 1933, an eighteen-year-old miscreant rushed through the rain at Tower Bridge to catch the Stadtholder Willem, about to hoist anchor and leave for Rotterdam. His luggage was light”a little money, a few letters of introduction, a knapsack, a sturdy pair of boots, an ash stick, some drawing materials, The Oxford Book of English Verse, and Horace’s Odes“all the more light because he did not intend to hang around in the Hook of Holland but to walk from there across Europe to the civilization-straddling metropolis that for him would always be Constantinople.

But deficiencies of kit or connection were amply compensated for by Patrick Leigh Fermor’s longing for picaresque adventure and a strong personality an exasperated former schoolteacher described as “a dangerous mixture of recklessness and sophistication.” He was also an instinctive antiquarian and amateur philologist”an unusual personality type, later summarized by one wondering journalist as “a blend of Indiana Jones, James Bond, and Graham Greene.”

“Leigh Fermor’s generation did not weary the world with self-analysis; they just did things, quietly or showily according to taste.”

His peregrination would take him through the intestines of a Europe on the verge of self-immolation into the most obscure corners of a continent where pre-feudal folkways had somehow persisted into the Art Deco era. He observed the lager-swollen, Lebensraum-thirsty stormtroopers spilling out of Munich’s HofbrÃ¤uhaus as a few years afterward they would spill over Germany’s frontiers. There were tanks on Vienna’s streets, and as he moved east he “became inoculated against Bolshevism.”

His wistful accounts of his walk would be suffused with sad awareness of what such manifestations of modernity meant for the Europe he had come to find. These classics of travel literature”A Time of Gifts and Between the Woods and the Water“were written decades later with the help of historical hindsight. They were the products of obsessive editing and some confabulation, but even the young Leigh Fermor could see that pre-modern Europe existed on borrowed time. Unlike his communist contemporary Laurie Lee, who poetically recorded the Gloucestershire and Spain he sought to turn into Soviets, Leigh Fermor traveled in the service of tradition, even taking part in a militarily insignificant but memorably evocative Greek Royalist cavalry charge.

He found old Europe just in time to write about its counter-temporal cultures in what Nicholas Shakespeare disdainfully terms “Manueline prose…overly crammed with truffles.” Yet Manueline style suits the subject in all its complexity and color, its crisscrossing connections and layers, lost landscapes, jealous identities, and ancient animosities. Leigh Fermor roots in a reverie amid history’s scattered fragments”giant catfish patrolling the untamed Danube, bears in the high woods, intoxicatingly empty seas of grass, shepherds in outlandish sheepskin overcoats with spiked-collared dogs to fend off wolves, churches still the centers of local cults, farmhands fervently reenacting pre-Christian rituals, eccentric polymaths with extensive libraries, relict ethnic groups left behind by long-retreated armies, crumbling cartouches, invalid flag-making, and sailors who played musical instruments that would have been recognizable to Odysseus. He mingled with representatives of all the nationalities he encountered, whether peasants or princesses, dining in cafÃ©s or caves, sleeping in haystacks or great houses according to the hazards of the highway, with the accepting flexibility of youth. Small wonder that his reminiscences should have met with favor among postwar Europeans, for whom Europe is no longer an epic, but a synonym for the barbarizing activities of Brussels’s bore-acrats.