A Triumph of Terrorism 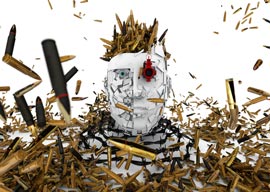 Western media are declaring the million-man march in Paris, where world leaders paraded down Boulevard Voltaire in solidarity with France, a victory over terrorism.

Isn’t it pretty to think so.

Unfortunately, the massacre at Charlie Hebdo, its military-style execution, the escape of the assassins, and their blazing end in a shootout Friday was a triumph of terrorism not seen since 9/11.

Unlike the Boston Marathon bombing where the Tsarnaevs did not know or care whom they maimed or killed, the attack on Charlie Hebdo by the Kouachi brothers was purposeful and targeted terrorism.

And like a flash of lightning in the dark, it exposed the moral contradictions and confusion of the West.

During the slaughter the Kouachis shouted “Allahu akbar,” said they had “avenged the Prophet,” and spoke of ties to al-Qaida.

And the first response of President Francois Hollande?

These terrorists “have nothing to do with the Muslim religion.”

“It was not the right to publish that provoked the slaughter, but the content of what was published.”

This is political correctness of a rare order. Perhaps terminal.

Linking arms with Hollande in solidarity and unity Sunday was Bibi Netanyahu who declared, “I wish to tell to all French and European Jews—Israel is your home.” Colleagues urged French Jews to flee to Israel.

Marching on the other side of Hollande was Palestinian leader Mahmoud Abbas who seeks to have Netanyahu’s Israel indicted in the International Criminal Court for war crimes in Gaza. Solidarity!

In chanting “Je Suis Charlie,” the marchers showed support for a magazine French Muslims rightly believe is racist and anti-Islamic.

Yet, Marine Le Pen, leading in the polls for the French presidency, was blacklisted from marching for remarks about Muslim immigration that are benign compared to what Charlie Hebdo regularly publishes.

All weekend long, journalists called it an imperative for us all to defend the lewd and lurid blasphemies of the satirical magazine.

But as journalist Christopher Dickey points out, Muslims in the banlieues wonder why insulting the Prophet is a protected freedom in France, while denying the Holocaust can get you a prison term.

Hypocrisy is indeed the tribute that vice pays to virtue.

Moreover, all this chatter about freedom of speech and of the press misses the point. It was not the right to publish that provoked the slaughter, but the content of what was published.

When Aaron Burr challenged Alexander Hamilton to a duel, and killed him, he was not attacking the First Amendment freedom of the press, but rather Hamilton, for defamation of Burr’s character, which had helped to destroy Burr’s career.

What the commentators seem to be saying about the assault on Charlie Hebdo is that not only is what is spoken or published protected by the First Amendment, but those who print and publish vile things must never suffer violent consequences.

People who believe this is attainable are living in a dream world, and may not be long for this one. Even as children you knew there were words you did not use about someone else’s girlfriend, mother, family, faith or race, if you did not want a thrashing.