A Troll Down Memory Lane 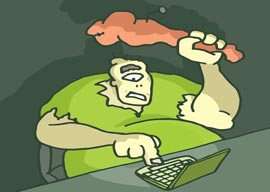 By the time you read this, the Memories Pizza “gay wedding” story will have gone the way of every overhyped, outrage-inducing Internet meme, relegated to the “you”re still talking about this after two weeks?” graveyard of planned obsolescence. The story has completed its arc: ABC affiliate makes national news out of totally random small-town pizza shop owner’s hypothetical statement that she wouldn”t cater a gay wedding if asked; gays go nuts and pummel pizza shop; Christians and conservatives rally around pizza shop, raising nearly a million dollars through a crowdfunding campaign; gays decide that all of a sudden the story isn”t as important as they thought it was 24 hours earlier; people move on and balance is restored to the universe.

In a way, everybody got something out of it. Gays got new ammo for their confirmation bias that Middle America hates them, Christian conservatives got a chance to prove that leftists aren”t the only ones who can crowdfund bullying victims into a new tax bracket, the pizza shop owners got enough money to finally take that dream vacation to Muncie, and ABC 57 (home of “lactose-intolerant foodie weatherman” Greg Bobos) got national exposure.

And all it took to manufacture such glorious outrage was for the ABC affiliate to take the hypothetical statement of a random, private citizen who answered a “man on the street” Q&A and turn it into a lead story about the first case of “denial of service” under Indiana’s Religious Freedom Restoration Act. What ABC 57 did was blog-level sensationalism, proof that “clickbait culture” is infecting the mainstream media like a cancer. Don”t get me wrong “ the mainstream news media has always been lousy. I”m just saying that clickbait culture is making a bad thing even worse.

“Clickbait culture” is the exaggeration of the trivial in the pursuit of hits, views, and shares. “Man finds tin can on beach; what he does next will astound you!” “Woman feeds string cheese to tabby; the cat’s reaction will change your life!” You know the routine “ stories built around nothing, but hyped as though they”re about nuclear war in the Middle East. Because let’s be honest, there’s just not enough nuclear war in the Middle East to fill Facebook feeds and ABC affiliate air-time (and “lactose-intolerant foodie weatherman” Greg Bobos is getting pretty damn tired of padding his segments with stories about how he can”t eat ice cream even though “I hear it is pretty good stuff”).

I decided to run my concerns about ABC 57’s behavior past a man many consider to be the nation’s leading journalistic ethicist. Al Tompkins is The Poynter Institute’s senior faculty member for broadcasting and online journalism. Author of “Aim for the Heart: A Guide for TV Producers and Reporters” and co-author of the Radio and Television News Directors Foundation’s “Newsroom Ethics” workbook, Tompkins has received a Peabody Award, and the National Academy of Television Arts and Sciences Governors Award, for his work in journalistic ethics.

I expressed my concerns to Mr. Tompkins:

“By KABC 57 journalist Alyssa Marino’s account (on Twitter), the owners of Memories Pizza were minding their own business when she entered their establishment to ask their opinion of the RFRA. As Ms. Marino also admitted, no denial of service to gay customers had taken place, and the scenario about the gay wedding was hypothetical. ABC 57 headlined the story “Michiana business wouldn’t cater a gay wedding,” with the on-air caption “Restaurant denies some service to same sex couples.” Even worse, the story was described on the ABC 57 site as being about the “first business to publicly deny same sex service.” That strongly implies service had been denied.”

While correctly pointing out that the pizza shop owners are adults and that they consented to go on camera, Mr. Tompkins agreed that ABC 57 misled its viewers: “My main comment would be if the station wanted to hear from this business, they should have/could have made it a lot clearer that the whole idea is, as you say, hypothetical. They have not, to date, denied anybody’s event. There is some value, I think, in hearing from people who want to run a business in a way that aligns with their faith.  But they do not CURRENTLY face a dilemma. They did not deny; they did say they would deny”it is a BIG difference, as you point out.”

I asked Mr. Tompkins, “In your experience, have you ever seen an instance in which one private citizen’s answer to a “man on the street”-style Q&A about something controversial became the basis for an entire lead story?” He replied, “I always hesitate to “in my experience’ things – since my experience is not exhaustive, but nothing similar comes to mind.”

So far, the worst manifestation of clickbait culture’s seepage into mainstream news has come from supposedly respectable journalists basing entire stories on anonymous online comment trolls. This has been happening a lot. Occasionally, I”ve called journos out on it, with mixed results.

Last April, The Daily Beast’s Michael Tomasky wrote a story in which he claimed to “prove” GOP racism by citing racist comments on conservative websites. I expressed my reservations about his methodology:

“I’m interested in what I perceive as a growing journalistic trend of basing stories off Youtube and website comments, which I think is a risky proposition, because of the anonymity of such comments. It’s practically impossible to tell who’s being sincere, who’s being a jerk for the sake of it, and who’s just trying to stir things up. And some people might even be writing the opposite of what they actually think, just to get the goat of other commenters. In your study of racist comments on conservative sites, did you in any manner attempt to get a control sample, something to measure those comments against, by studying comments on liberal sites?