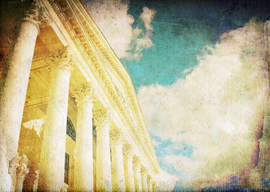 Of the 17 lawyers who have served as chief justice of the United States, John Marshall—the fourth chief justice—has come to be known as the “Great Chief Justice.” The folks who have given him that title are the progressives who have largely written the history we are taught in government schools. They revere him because he is the intellectual progenitor of federal power.

Marshall’s opinions over a 34-year period during the nation’s infancy—expanding federal power at the expense of personal freedom and the sovereignty of the states—set a pattern for federal control of our lives and actually invited Congress to regulate areas of human behavior nowhere mentioned in the Constitution. He was Thomas Jefferson’s cousin, but they rarely spoke. No chief justice in history has so pronouncedly and creatively offered the feds power on a platter as he.

Now he has a rival.

“The logic in the majority opinion is the jurisprudential equivalent of passing a camel through the eye of a needle.”

No one can know the true motivations for the idiosyncratic rationale in the health care decision written by Marshall’s current successor, John Roberts. Often five member majorities on the court are fragile, and bizarre compromises are necessary in order to keep a five-member majority from becoming a four-member minority. Perhaps Chief Justice Roberts really means what he wrote—that congressional power to tax is without constitutional limit—and his opinion is a faithful reflection of that view, without a political or legal or intra-court agenda. But that view finds no support in the Constitution or our history. It even contradicts the most famous of Marshall’s big government aphorisms: The power to tax is the power to destroy.

The reasoning underlying the 5 to 4 majority opinion is the court’s unprecedented pronouncement that Congress’ power to tax is unlimited. The majority held that the extraction of thousands of dollars per year by the IRS from individuals who do not have health insurance is not a fine, not a punishment, not a payment for government-provided health insurance, not a shared responsibility—all of which the statute says it is—but rather is an inducement in the form of a tax.

The majority likened this tax to the federal taxes on tobacco and gasoline, which, it held, are imposed not only to generate revenue but also to discourage smoking and driving. The statute is more than 2,400 pages in length, and it establishes the federal micromanagement of about 16 percent of the national economy. And the court justified it constitutionally by calling it a tax.