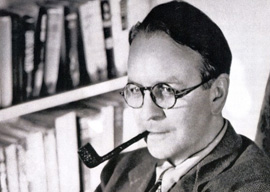 I stopped reading novels long ago. When those arch-phonies writing magic realism became household words, I dropped out quicker than you can say, “Raymond Chandler.” Now that’s what I call a novel”the stuff Chandler churned out about old El Lay, everyone gulping booze and puffing away like steam engines, and only exercising between the sheets. Crime writers have always had an inferiority complex about their work, but they sure beat some of the clowns posing as novelists nowadays. Chandler was a master of style, a serious writer who applied his classical English education to the task of creating rich slang. His similes were extravagant and P. G. Wodehousian: “[H]e looked about as inconspicuous as a tarantula on a slice of angel food.” Chandler turned detective stories into art, labeling Los Angeles the city “with the personality of a paper cup.”

Chandler taught himself to write by churning out pastiches of Hemingway, the other writer I read when very young, a man who along with Fitzgerald formed my life. After reading The Sun Also Rises, I had to go to Pamplona and run with the bulls, chase hard-drinking women who were like Lady Brett Ashley, and get into drunken fights in Paris nightclubs. Fitzgerald was even worse for me. All Jay Gatsby did was party, as did Dick Diver and Tommy Barban in Tender Is the Night. All three had character, were inwardly sensitive and decent, and all three threw their lives away for women.

“Some of the untalented and illiterate phonies who write unreadable prose dismiss many of those I have mentioned as small fry. It’s like insects calling lions weaklings.”

John O”Hara was another writer I adored when still a schoolboy. He was never taken seriously as a top writer, which shows how little the critics know. His Appointment in Samarra left me shaken and fascinated as to how quickly one’s life can collapse. O”Hara was obsessed with the world of the rich, forgivable enough for someone who rose from obscure poverty, and a fascinating subject to boot. His short stories were top of the line, as were his novels Ten North Frederick, From the Terrace, and The Lockwood Concern.

Speaking of underrated writers, what about the master, W. Somerset Maugham? I wouldn”t dare call him “Willy” to his face, but he was a great stylist, a wonderful short-story writer, and his The Razor’s Edge is one of the masterpieces of English prose. Larry Darrell’s minimal subsistence”by choice”to cultivate the life of the spirit is a lesson some of our present masters of the universe would do well to ponder.

Norman Mailer’s An American Dream was outrageously provocative in the existential angst of its hero Stephen Rojack, and later on Mailer’s Harlot’s Ghost was a beautifully written and researched opus. Tom Wolfe’s Bonfire of the Vanities is a modern classic, illustrating exactly what Larry Darrell had foreseen as capitalism’s soul-wrenching weakness. Gore Vidal’s Washington, D.C. had me enthralled about the goings-on inside the Beltway, a place I”d choose instead of jail, but only just.