A Voice in the DC Wilderness 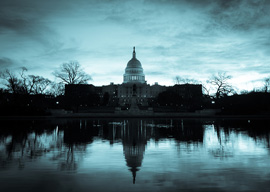 NEW YORK—Ten years ago this week I put my money down and The American Conservative magazine was born. They say that owning a yacht is like sitting under a shower tearing up hundred-dollar bills. Owning an opinion magazine based in Washington, DC is like sitting in a dull hotel room throwing thousand-dollar bills to the fire. A boat will at least get you some attention from the fairer sex—if it’s large and vulgar enough, that is—whereas a political fortnightly might attract some bores with lotsa dandruff on their collars, but that’s about it.

For starters, Washington is as boring a town as they come. A large percentage of the people who work there might be women, but they certainly don’t line the bars at night looking for horny Greeks. After millions spent, there were a couple ladies to speak of—both Southern belles—who had nothing to do with the magazine. I had two partners, Pat Buchanan and Scott McConnell, both of whom I treated equally by giving them the same amount of shares free of charge as I gave myself. It was not the smartest of moves, but I’m an impulsive sort of character and much too impatient to think things out. Pat Buchanan had run for president three times and is still Mr. Conservative as far as I’m concerned. McConnell was the editor, and I had trouble with him from the beginning, as I tend to go for the jugular at times, whereas he prefers the friendly persuasion approach to politics.

“In Hollywood melodramas, the bad guys are always revealed toward the end and more often than not, they get their comeuppance. Not in real life. The same bad old neocons are still at it.”

Pat, Scott, and I held a press conference in the National Press Club building in Washington for the launch, where I realized from the word go how deeply mistrusted and loathed is anyone who describes himself as a paleoconservative. The coverage by The New York Times and Washington Post had more to do with my drug bust of a quarter-century before than the startup of a new political biweekly. During the press conference I was asked time and again if I was using Saudi money. Saudi money? I’d rather catch the clap than use camel-jockey moolah, but it illustrates how much homework the Fourth Estate does. I’ve only been writing against them bums for 30 years, was all I said. When asked what my reasons were for coughing up the startup cash, I tried a bit of humor and answered, “for the women.” It went over like a loud fart in church.

Our first cover story was written by Eric Margolis: “Iraq Folly: How Victory Could Spell Defeat.” Pat Buchanan had a story on empire and how we should stay away from Iraq. I wrote about Ayn Rand and John Galt and how my father was no John Galt but a caring capitalist who looked out for his workers.

Iraq turned out to be the greatest foreign-policy blunder ever, and counting. Ten years to the day, all one has to do is substitute an “n” for a “q.” Iran will be far worse and could end up in Armageddon. Yet the same players who beat the war drums against Saddam’s WMDs are back playing the same tune, this time against Iran’s nuclear weapons.