A Wee Change of Heart 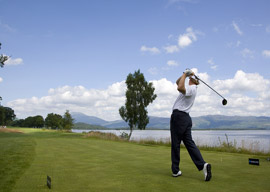 Donald Trump is half Scottish. His mother’s family had a croft”a smallholding”on the Isle of Lewis in the Hebrides, and he is proud of his Scottish roots. So when, ten years ago, he announced his intention of building “the world’s best golf course in Scotland,” he spoke of this being in his mother’s memory. Well, we all approve of a man who honors his mother. So this was fine. It’s true that Scotland isn”t exactly short of great golf courses; five of the courses on the Open Championship rota over the past half century are here”St. Andrews, Carnoustie, Muirfield, Turnberry, and Troon. There are also many fine courses in Aberdeenshire where Mr. Trump planned to build his, among them Royal Aberdeen, which has hosted the Scottish Open and the Walker Cup. Nevertheless there might still be room for one more.

So when, back in 2006, Mr. Trump appeared on the scene, brandishing thick wads of dollar bills, so to speak, he was made welcome as rich Americans usually have been when promising to invest in Scotland. In general, people in Aberdeenshire greeted his plans with some enthusiasm. Aberdeen had boomed over the past forty years as the oil capital of Britain, but everyone knew that North Sea oil was a finite asset, and that plans must be made for the day the oil runs out.

The politicians were very happy to see Mr. Trump, inward investment being always greeted as good news”at first anyway. Jack McConnell, the leader of the Scottish Labour Party and First Minister of Scotland, went so far as to make Mr. Trump a Global Business Ambassador for Scotland. When, after the Scottish election in 2007, McConnell was replaced as First Minister by Alex Salmond, the leader of the SNP (Scottish National Party), enthusiasm for Mr. Trump remained unstinted. Indeed, something like a bromance developed between Alex and The Donald. They had a good deal in common. Both were chancers, with a love of publicity and a talent for one-liners”natural buddies, it seemed. Besides, Mr. Salmond was very reasonably eager to demonstrate that the SNP government was business-friendly. So all went merrily as a wedding bell. At first.

“I don”t know if Mr. Trump still proclaims his love of his mother’s homeland, but Scotland no longer seems to love him.”

Mr. Trump bought land from the Menie Estate in Balmedie near Aberdeen on a stretch of coast with a glorious view (on days when there was no fog) over the North Sea. His plans were lavish. He would build two golf courses, one of Championship standard; a 450-room hotel; 36 golf villas; 950 holiday homes; accommodation for 400 staff members; and 950 houses for sale. He would provide at least 1,500 permanent jobs, while there would be another 6,000 employed during the construction period. It was all manna from Trump heaven, he implied.

Soon, however, there was a hitch. The sand dunes on which the championship course was to be built are listed by Scottish Natural Heritage as a Site of Special Scientific Interest, and as such the land was legally protected from development. Now, it’s fair to say that, weighing this against Mr. Trump’s promises, many in Aberdeenshire didn”t give a hang about the sand dunes being an SSSI. Nevertheless the law is what it is, and the planning committee of the Aberdeenshire council rejected Mr. Trump’s application. Their decision might have been overturned”some said would have been overturned”by the full council, but Mr. Trump, being a man of action, impatient and indignant, couldn”t wait for this. He went straight to the top, to his friend the First Minister. The bromance was still going strong, and so Mr. Salmond obligingly responded. He directed that the planning application be passed up to the Scottish government, which promptly approved it. So Mr. Trump got the go-ahead and work began on the golf course.

Then came the next hitch. There were a few properties, a small farm or croft and some houses, that had been previously sold to their occupants by the owners of the Menie Estate, and these lay within the part of the estate that Mr. Trump had bought for his golf course. Naturally, he didn”t like them. They were in the way and their image was wrong. He wanted rid of them, and was ready to buy them out. This was particularly true of the smallholding owned by a man called Michael Forbes. Now, Mr. Trump is a deal-maker and, as he tells us, a very successful one who has made deals all over the world. But he couldn”t make a deal with Mr. Forbes. To every advance Mr. Forbes said no. Mr. Trump offered to make him a rich man for life. Mr. Forbes said no. There’s a good Scots word, “thrawn”; it means obstinate and then more than obstinate. You might apply it to a horse that refuses to cross a stream or be backed between the shafts of a cart. Mr. Forbes was as thrawn as they come; he was thrawnness personified. He said no as firmly and repeatedly as Stalin’s foreign minister Mr. Molotov used to say nyet. This was one deal the great deal-maker couldn”t make. I must say, if I were American, the story of Mr. Trump and Mr. Forbes might make me just a tad worried about Mr. Trump’s boasted ability to make deals with other world leaders when he is president; some of them may be a bit thrawn too.

Be that as it may, Mr. Trump, having failed to buy or bribe Mr. Forbes, began to insult him, calling his place a mess, a disgrace, even, if I remember rightly, a pigsty. Now, it’s true that Mr. Forbes” small farm wouldn”t, like many such places, crofts or homesteads, win a Good Housekeeping prize. There are old bits of machinery lying around, rusted corrugated iron roofs, broken fences, and suchlike. I can see why it might offend a fastidious person like Mr. Trump. On the other hand, so what? It’s Mr. Forbes” property, and Mr. Trump surely believes in property rights.

By now the Trump-Forbes confrontation had gone public, and it didn”t add to Mr. Trump’s popularity. On the contrary, Mr. Forbes was becoming a local hero, the man who couldn”t be bought or bullied. It was all reminiscent of a classic Western”Shane, for example, where the big rancher tries to run a homesteader out of the valley, and when he refuses, hires a gunman (Jack Palance) to frighten him and the other homesteaders off. Well, there was no gunman, of course”our gun laws are strict in Scotland; so there was no need for Alan Ladd to come to Mr. Forbes” rescue. Instead Mr. Forbes was nominated “Scot of the Year” for his defiance, an award given by the makers of Glenfiddich Scotch whiskey. (Mr. Trump said the award was “an embarrassment to Scotland”; I don”t know if Glenfiddich is still served in Mr. Trump’s hotels.) Anyway, Mr. Forbes remains on his small farm, to the disgruntlement of The Donald. There was some talk of seeking “compulsory purchase””an equivalent of “eminent domain””but this is usually granted only if there is public interest in the development being stalled by someone who refuses to sell his property. There’s no public interest in this case, only Mr. Trump’s private interest. But just in case a court decided there might be, a hundred people, mostly local, have bought tiny pieces of Mr. Forbes” property and are registered as proprietors, thus making any attempt at legal process arduous, long-drawn-out, and uncertain.

Mr. Forbes wasn”t the only irritant. Other property owners were in the way. They too were thrawn, either refusing to sell or being otherwise obstructive. Moreover, the appearance of their houses didn”t match the high standards demanded by Mr. Trump and the Trump Organization. So one lady had her view of the sea blocked by a high earth rampart topped with trees. Another found his garden fence didn”t meet Trump standards. So it was demolished and a five-foot-high wooden palisade erected in its place. To cap it all, the Trump Organization sent him a bill for the new fence. He hasn”t paid, refuses to pay, and remarks that if Mr. Trump can”t get him to pay for a garden fence, he doesn”t hold out much chance of the Mexican government paying for his famous wall when it is built.