A Whiff of Protest 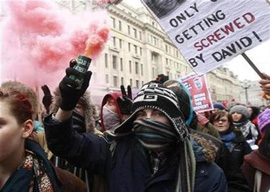 Ego olere ergo sum. (I stink, therefore I am.)

Such could be the motto of the unpleasant and unwashed who these days routinely appear on a whim to riot in London’s streets. I suspect that this summer and autumn will see an upsurge in their antics. And all the while, supine and ineffectual, the police will be following from a safe distance as the rioters break glass, spray their paint, and terrify bemused and cowering onlookers.

They are all of a type. Like worms dropping from a dog scraping its rear on a carpet, violent thugs regularly break free from peaceful but left-wing-inspired demonstrations and embark on a frolic of their own. London has become a playground and free-fire zone for the freakish and the angry.

Now that the spoiled and subsidized public-sector workers are threatening strikes (thus sparing the nation several days of their slothful incompetence), the lunatic fringe will be gearing up. Locations will be chosen, banks and hotels and other evil centers of capitalism targeted, and the balaclavas donned. Here we go again. They bear a grudge and feel they must express it. Besides, rioting is fun. The greatest aspiration of misfits and inadequates is to spread fear and cause damage, to inflict grievous bodily harm on the society and system that feeds, houses, and indulges them. Give nonentities a cause or a boilersuit or a loose brick, and life becomes sweet for them and hell for the rest of us. National Socialism, anarchy, or holy war—recruits can always be found.

“Believe me, there is nothing warm and humane in those who espouse love and peace and the brotherhood of man.”

What so often marks out these protestors is their level of self-importance, their disregard for others, and their sheer aggression. They belong to a modern tribe that believes shouting the loudest makes them right. Even the peaceniks are insufferably belligerent. So it was with that odious and recently deceased “campaigner” Brian Haw, who took it upon himself to protest a variety of issues for a decade at Parliament Square. And, my, did the self-promotion go to his flannel-hat-covered head. The cause is largely irrelevant, as most of these professional megaphone-beatniks are actually working something out in their own wobbly psyches. Give them a platform and they’ll chain themselves to it. The rest of us have lives.

Regarding her old rival Joan Crawford, it was Bette Davis who allegedly pronounced:

You should never say bad things about the dead, you should only say good….Joan Crawford is dead. Good.

Now it is Brian Haw’s turn to pitch off this mortal coil. Good. Rest in peace, Brian. Some called him courageous, while I believed him to be deranged. I encountered him while being interviewed for radio on Parliament Square in a conversation he rudely and loudly gate-crashed as though he owned the site. He called me scum and claimed I had “the eyes of a murderer” (if only he knew), and I told him to fuck off. I felt a duty to maneuver this disturbed little Hitler in front of the microwave communications dish in order to sterilize him. Ah, happy memories and quite an insight into the fascistic and threatening mindset of the all-too-average protestor. Believe me, there is nothing warm and humane in those who espouse love and peace and the brotherhood of man.

Protestors rarely march for the common good. Observe those strident public-sector workers as they beat their drums and wave their placards and lay siege to London in the coming months. We are all supposed to be moved by their plight. Sod them, their generous pensions, their long holidays, their early retirements, their easy lives, and their constant whining. These are the favored and protected, the people who produce nothing, who add to the national debt, whose salaries and pensions and inflated bureaucracies have brought us near bankruptcy. Yet still they parade and complain that they might have to work to the same age as the rest of us. They blub that they will be forced to contribute to their own pensions. Never has there been a more vociferous special-interest group. And never in the field of human inertia has so little been done by so many for so few.