A Wilderness of Mirrors 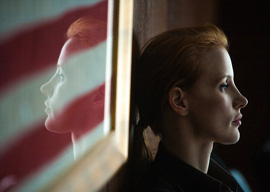 Kathryn Bigelow, director of the Kill Osama thriller Zero Dark Thirty (which goes into national release Friday), has always been the film nerd’s dream date: attractive, classy, artistically ambitious, feminine, and fascinated by men who like blowing up stuff.

The favorite gal of the Boys Club of Tough Guy Directors ever since Walter Hill (The Warriors) mentored her three decades ago, she was briefly married around 1990 to the King of the World, James Cameron. So it wasn”t terribly surprising that she broke through three years ago to become the first woman to win the Best Director Oscar with her Iraq War movie The Hurt Locker, beating her ex-husband and his Avatar.

Yet Bigelow’s highest-grossing film, the 1991 surfing bank-robber movie Point Break, made only $43 million, and The Hurt Locker took in $17 million. That’s because she makes austere highbrow movies about lowbrow subjects.

Bigelow was academically trained in modern art theory. The Hurt Locker might be my favorite art-house movie of the century, but that’s partly because it tries to do so little that it’s simple enough for me to explain how Bigelow chose her lenses to convey her theme.

The Hurt Locker‘s last few minutes struck me as a thrilling display of directorial virtuosity. But a more cynical interpretation is that Bigelow merely made it simple enough for me to decode. Bigelow’s minimalism makes me feel smart enough to recount her methods to readers.

Zero Dark Thirty will earn vastly more than The Hurt Locker due to its irresistible subject matter: Osama getting whacked. The first half-hour consists of a CIA agent systematically abusing a captured al-Qaeda accountant in 2003, the next 90 minutes are a police procedural digging for the identity of bin Laden’s courier, and the last half-hour consists of bin Laden’s famous extermination by Navy SEALs in May 2011.

“Zero Dark Thirty will earn vastly more than The Hurt Locker due to its irresistible subject matter: Osama getting whacked.”

Stylistically, it’s a perfectly adequate shaky-cam movie in the contemporary manner. It has moments of awesomeosity, such as the prearranged code the SEALs radio back to signal that, after ten long years, vengeance is theirs: “For God and country, Geronimo, Geronimo, Geronimo.”

(How do most American Indians feel about “Geronimo” being the US military’s favorite shout of exultation? Proud, I would assume. But when I tried to look up evidence for that, all I could find were professional protestors protesting.)

Still, Bigelow’s new film is an austere one that likely wouldn”t find a huge audience without the happy ending. It’s well made, but the over-the-top reviews hyping Zero Dark Thirty as the Best Movie of 2012 (or as the Most Evil Movie Ever) stem from its topicality.

For 50 years, the CIA, with self-defeating WASP dignity, turned down all requests for cooperation from the entertainment industry. Meanwhile, the shameless publicity hounds of the Marine Corps and J. Edgar Hoover’s FBI accommodated Hollywood with millions of dollars” worth of free advice and props, earning themselves endless portrayals as the good guys undermined by the agency’s Yale-educated but clueless elitists with thin lips and thinner hair.

In 1996, the CIA dispatched veteran operative Chase Brandon to schmooze Hollywood, offering inside baseball tips in return for favorable portrayals. The only problem has been that in what passes for the real world, the CIA didn”t have a good first decade of the 21st century, what with 9/11, the nonexistence of Saddam’s WMDs, and Osama bin Laden’s elusiveness.

With bin Laden’s execution, the CIA finally has had something to crow about. Since then, they appear to have been promoting the legend of “Jen,” the brilliant, relentless young CIA analyst who tracked down Osama. In Zero Dark Thirty, Jessica Chastain plays a version of Jen, this time a striking redhead who, oddly enough, doesn”t speak Arabic.

But all that ought to raise a question. As CIA counterintelligence legend/nightmare James Jesus Angleton famously observed, quoting his idol T. S. Eliot, spying is “a wilderness of mirrors.” And so is making movies about spies.