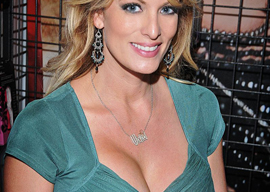 NEW YORK—If Albanian television had shown the program CBS showed last week—with a woman who has sex on camera for a living describing how she had unprotected BingBing with The Donald—I think even Albanians would feel so diminished they’d move to Kosovo. But this is America, and it’s a woman’s, woman’s, woman’s world! Or perhaps a frontal lobe is missing.

Newspapers and TV have all become sacred spaces of the sisterhood, no ifs or buts about it, as they used to say in the Bronx. My hero H.L. Mencken said something quite different, but that was some time ago: “Love is the delusion that one woman differs from another.” Mencken also quipped that “When women kiss it always reminds one of prizefighters touching gloves.” Great stuff, isn’t it? But I hate to think what these female versions of Vlad the Impaler who are in the news would do to Mencken if he were around today.

“How come women aren’t running Silicon instead of injecting the stuff into their breasts to lure The Donald to their bed?”

Never mind. The avenging warriors may be weasel-brained and look like four-eyed turds, but they’ve got the major news outlets and all the big-city populations behind them. In an editorial, the Big Bagel Times thundered: “We live at a time when a porn star displays more credibility and class than a president.” Well, that’s because the Bagel Times prefers someone who has sex in front of a camera for money over The Donald, who I admit has never been accused of having class, except he has a bit more than The New York Times. The paper can no longer be taken seriously, its animus against anyone white, heterosexual, and Christian so pronounced, it makes some of us who are still all three of the above feel like Jews in Germany circa 1936.

Again, never mind. Somewhere in the middle of all the shouting, the Weinsteining of all men, natural law is taking a back seat. Natural law can trace its lineage to the Greeks, Plato and Aristotle, and then to Cicero and on down the line to Montesquieu and Burke. Natural law clashed with natural rights during the French Revolution, and I think the two are clashing once again now that the sisterhood has taken over the American media. I hope there will be a reaction to all this, but for the moment it is all one-sided.

The next target is Silicon Valley, and this time I’m on the side of the girls. Those girlie-men out there have the emotional quotient of a worm and give nerds a bad name. Alas, the ladies have not measured up. Only 22 percent of computer-science degrees in the past decade have gone to the fairer sex, which means, I suppose, that Silicon Valley has turned into a frat house because the sweetie pies have not made the grade. Boo! Down with sexism!

A Bagel Times female blames it on “women’s ideas being more harshly scrutinized.” Better yet, she blames it on “Impostor Syndrome,” described back in the ’70s as a fraud-like feeling of not deserving one’s success. Boo! Down with sexism! Europe mandates quotas in such situations, and that is why Europe is doing so much better than the U.S. of A. Nurse, help! And yet, a couple of weeks ago the dear old Speccie reviewed a biography of Ada Lovelace, a proto-scientist who in 1840 became the mother of the computer. So what happened? How come women aren’t running Silicon instead of injecting the stuff into their breasts to lure The Donald to their bed? The sex industry made it much too easy and much too profitable for the fairer sex to do an Ada and study their pretty little brains out. Becoming a victim—or spreading one’s legs—is easier, and it gets you the benefit of the doubt where the fourth estate is concerned.

Mind you, I couldn’t write any of the above in an American paper and not have my house burned down. Thank God I live on the Upper East Side and my building is a listed one with great security. I am surrounded by aspirations and social climbing, women who constantly measure themselves against their peers. They have no time to go and get little Taki, the male chauvinist ogre, or join the “pulverize the patriarchy” crusade. Their biggest problem is how to treat staff. Get too close and they’ll think one comes from Palookaville. Be too haughty and people will say you’re putting on airs. So what can a girl do, living up here? Move to Albania and become a lady overnight. Or have an affair with the 45th president of the United States and become a media darling. Just stop fretting and take it from Taki.