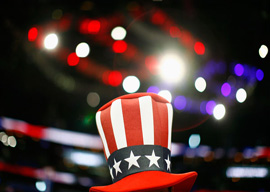 If the recently adjourned Republican National Convention was intended to cure insomnia, it was a thundering success. But if it was meant to light a fire under unmotivated voters’ asses, it’s doubtful that it even warmed anyone’s coffee. There was nothing electrifying about it. This was a zero-watt affair.

The most dramatic element all week wasn’t even the convention itself; it was Hurricane Isaac, which threatened to cancel the entire shindig but only wound up shutting down most of Monday’s planned festivities. After the tepid hurricane had passed, the lukewarm convention resumed on Tuesday in the awful town of Tampa in the repugnant state of Florida.

During Tuesday afternoon’s delegate roll call, South Dakota’s spokesman bragged that his state was the “pheasant-hunting capital of the world,” which lent a strong impression that there’s not a lot going on in South Dakota. Delaware’s spokesman either had a stroke on camera, suffers from a severe stutter, or simply forgot what’s notable about Delaware, as we all are wont to do. And whenever a state split their delegates between Mitt Romney and Ron Paul”the latter of whom actually won a majority of delegates in a few states”the blonde female robo-bimbo who shouted out each state’s tally from onstage never mentioned Paul’s delegates, repeatedly leading to audible jeers from Paul supporters. One state’s bumbling spokesman even mistakenly called him “Paul Ryan.”

“There was much talk of “personal responsibility” but not a whisper of who was personally responsible for putting on such a boring convention.”

Although Ron Paul was honored with a token four-minute tribute video and his curly-haired but stiff-as-an-ironing-board son Rand gave a speech, one could feel Ron’s gaping physical absence at the podium, presumably due to his refusal to allow Mitt Romney’s crack team of narrative-molders the authority to pre-approve what he might say if given the microphone.

Also notably absent were the last two Republican presidents, who by happenstance share the surname Bush, as well as “There’s a Reason They Call Me Dick” Cheney.

Severely disappointing was the utter nonexistence of all the virulent racism that leftist pundits had warned would manifest itself. We were hoping to see a lot more racism. Beyond the endless TV panels of white pundits chiding Republicans for a lack of diversity and a moronic Yahoo! News chief claiming that Republicans were “happy to have a party when black people drown,” a presumably leftist cyber-vandal messed with cocoa-colored Republican Utah Mayor Mia Love’s Wikipedia page, calling her a “house nigger” for refusing to join the political party they’d pre-assigned for her.

The only act of alleged racism the witch-hunters could find was when a pair of convention attendees threw peanuts at a black CNN camerawoman and called her an animal, which apparently is racist simply due to her skin color, because everyone likes peanuts. A Romney spokesman called the incident “reprehensible,” probably because it’s wrong to waste good peanuts.

If anything, the GOP bent over ass-backwards to appease PC diktats, keeping mum on immigration and stuffing their oratories with phrases such as “our multicultural voices,” “diversity,” “a very proud Latina,” and making sure the .00000002% of nonwhites in the crowd received ample camera time. A black female Democrat from Massachusetts gave a speech assuring everyone that Mitt Romney is “authentic,” and at any given moment it appeared as if a bronze-skinned speaker would seize the podium and jovially explain to the audience how to make a taco.