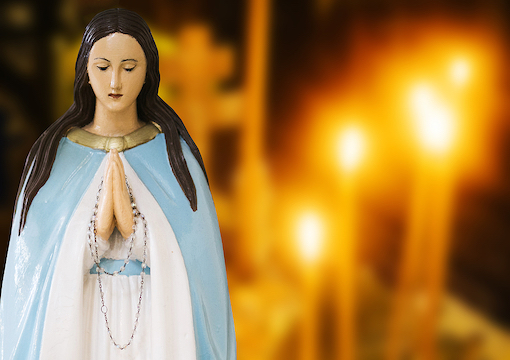 Christmas is almost upon us, that magical time of year when the Christian faithful can look forward to attending seasonally themed Holy Masses centering upon such traditional, comforting festive fare as the miraculous Annunciation, Immaculate Conception, and Virgin Birth of Our Lord Jesus Christ…and now, thanks to the European Court of Human Rights (ECHR), the equally sacred occasion of His Divine Abortion, too.

On 20 December 2013, Eloïse Bouton, a young Frenchwoman associated with the radical global feminist movement Femen, interrupted a carol service in Paris’ La Madeleine Church dressed as a topless parody of the Virgin Mary, with the phrase “344e salope,” or “344th slut,” painted across her stomach. This was in reference to an open letter issued by 343 self-described French “sluts” who publicly admitted to having had an abortion in 1971, back when the procedure was still illegal.

Abortion became legalized in France from 1975 onward, but this was still not enough for the 344th slut, who objected to Catholicism’s continued disapproval of the practice (an opinion the Church, of course, had no possible lawful ability to actually enforce…). Accordingly, Bouton spread her arms wide in the shape of a cross and most righteously pissed before the altar, tearing up slabs of bloody ox liver representing a stillborn fetus as she did so, thus crudely simulating the abortion of Jesus Christ in an obscene inversion of his birth 2,000 years ago in Bethlehem.

“How can the naked breasts of a self-professed “sextremist” not be deemed explicitly and intentionally sexual in their nature?”

“Christmas is cancelled!” the contemporary Scrooges of Femen gleefully posted on social media. “From the Vatican to Paris. The international relay of Femen against the anti-abortion campaigns led by the Catholic lobby continues, the holy mother Eloïse has just aborted the embryo of Jesus on the altar of the Madeleine.” The implication was clear: Priest-ridden, oppressed womankind would have been far better off if Christ had never been born.

Convicted of engaging in sexual exhibitionism, Bouton received a rather lenient suspended sentence, being ordered to pay €2,000 in damages and €1,500 in legal costs, a judgment later upheld in France’s higher Court of Cassation.

Her action was part of a wave of Femen stunts that year, as when topless student Josephine Witt clambered atop the altar of Cologne Cathedral on Christmas Day, with the phrase “I AM GOD” scrawled across her torso, later justifying her state of undress by saying, “Even Jesus is hanging half-naked on the cross.” Defiling Holy Mass was simply Witt’s way of exercising her sacred right to freedom of expression, as legally guaranteed under Article 10 of the European Convention on Human Rights, she said, her own personal rights clearly trumping those of all the other appalled worshippers present. Witt’s tattoo was correct: She really did think that “I AM GOD.”

The ECHR evidently thought Eloïse Bouton was God too, to judge by the abortive logic of their decision to overturn the Court of Cassation’s old ruling, a justificatory summary of which was released on 13 October 2022, following a lengthy appeal. ECHR judges dubiously deemed it had been the “sole aim of the applicant” to “contribute to the debate on women’s rights” when emptying her bladder inside a church, and that in fact she had “not been accused of any insulting or hateful conduct” by prosecutors, thus meaning her Black Mass pseudo-abortion could not be classed as a form of hate speech, something that even under Article 10 is deemed illegal.

Article 222-32 of the French Criminal Code “did not define the concept of sexual exposure,” the ECHR noted, perhaps because it should have been blatantly obvious what such a concept involves—e.g., publicly exposing your breasts inside a church, then ostentatiously giving the altar a golden shower. Yet the “evolution in moral standards” on this issue meant that, essentially, Parisian courts had unconsciously subjected Bouton’s bosoms to the dreaded “male gaze” so derided in feminist academic circles today. By simplistically viewing her breasts merely as breasts, not as walking, nipple-topped propaganda billboards, judges and prosecutors had avoided “considering the underlying message of her performance or the explanations given by Femen activists about the meaning of their topless protests.” Bouton’s act now had to be considered as a “performance,” with its church setting an inherent part of its artistic “mise en scène.” By this logic, Louis CK could justify his own sex crimes on the grounds of them constituting acts of innovative public performance art.

Being “struck by the harsh nature [sic] of the sanction imposed” on Bouton, the ECHR judged French justice to be in clear violation of Article 10, ordering Paris to pay the applicant €2,000 in compensation and €7,800 in legal costs. So, there you have it: Transforming Christian churches into public toilets for juvenile political purposes now appears to have been made explicitly legal in Europe, just in time for Christmas.

Exposing Themselves to Ridicule

Who exactly are Femen? Founded in Ukraine in 2008, and presciently viewing Putin as a future threat to their country, early incarnations combined anti-Russian theatrics with feminist rhetoric, the group coining the slogan “Ukraine is not a brothel!” in justifiable dissent against the post-Soviet exploitation of low-income local women as cheap prostitutes by the pan-European sex industry.

Unfortunately, as their members fled Ukraine and spread out across Europe, Femen’s more legitimate points soon degenerated into a pointless, attention-seeking brand of exhibitionist hooliganism, neatly rebranded as “sextremism”—crudely put, repeatedly getting your tits (ideally very large, shapely, and young ones, so paparazzi would pay close attention to them) out in public so as to pose as “the special forces of feminism, its spearhead militant unit, [the] modern incarnation of fearless and free Amazons.”

Upon Femen’s official website, they helpfully reveal the true nature of their current divine mission, based upon three core ideological planks of “Sextremism, Atheism, Feminism”: “Our Mission is Protest! Our Weapon[s] are bare breasts! And so FEMEN is born and sextremism is set off.”

Femen openly profess their desire “to initiate global women’s mob law over patriarchy,” as embodied by the three key male-controlled institutions of “dictatorship, sex-industry and church.” They aim to destroy this evil male troika “by putting these institutes through subversive trolling to force them to strategic surrender.” Breast-related sextremism “is a non-violent but highly aggressive form of provocation…an all-powerful demoralizing weapon undermining the foundations of the old political ethics and rotten patriarchal culture.” Femen’s ultimate slogan? “My Body Is My Weapon!”

So, according to their own specific written testimony, Femen consider each female protester’s naked body a “weapon” to be used in a “highly aggressive form of provocation” best characterized as constituting “subversive trolling.” The ECHR’s argument that Femen’s well-endowed ally Eloïse Bouton’s actions did not constitute hateful conduct aimed against the Catholic Church is therefore clearly disproved; how can the naked breasts of a self-professed “sextremist” not be deemed explicitly and intentionally sexual in their nature?

What are these, if not acts of “subversive trolling”—or “hate crimes,” as they would doubtless be considered by the ECHR if aimed against any religion other than that boring, embarrassing, outmoded, eminently pissable-upon old relic we call Christianity?

If Bouton had chosen to publicly menstruate in a mosque instead, I am sure that, in their infinite wisdom, Europe’s Solomon-like judges would have ruled precisely the same.