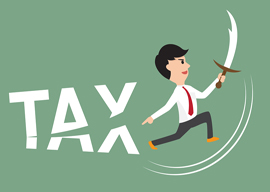 In taking that $915 million loss in 1995, and carrying it forward to shelter future income, Donald Trump did nothing wrong. By both his family and his business, he did everything right.

“[T]here is nothing sinister in so arranging one’s affairs as to keep taxes as low as possible. … Everybody does so, rich or poor; and all do right, for nobody owes any public duty to pay more than the law demands: taxes are enforced exactions, not voluntary contributions. To demand more in the name of morals is mere cant.”

This writer’s father spent his career as a tax accountant who studied tax codes and utilized every permissible deduction to keep his clients’ tax bills as low as legally possible.

That was his business, as it is the business of every accountant, including those who prepare the returns of the politicians and journalists piling on Trump as some sort of scofflaw tax cheat who has evaded his moral obligations to the state.

One needs a machete to cut through this hypocrisy.

“The War Party does not want Americans heading to the polls thinking of the thousands of dead and wounded and trillions of dollars lost in their misbegotten adventures in the Middle and Near East.”

Hillary Clinton benefited from a $700,000 loss on her 2015 income taxes. In the days of poverty in Arkansas, she took a $2 deduction for a contribution to charity of Bill’s old underpants.

Five weeks before Election Day, Trump’s taxes have displaced the former Miss Universe as the critical issue, as determined by the anti-Trump media.

Their motivation is not difficult to discern. Their goals are two. First, make Trump unacceptable as an agent of change. Second, keep the people distracted from their determination to rid America of the incompetent and corrupt ruling class that controls this capital city.

Consider but a few of the disasters that establishment does not want discussed or debated, or the American people thinking about, when they head for the polls in November.

There is the great betrayal of the American working class, the deindustrialization of the country, and the loss of economic independence it took America a century to achieve.

This disaster was produced by the trade deals enacted by Beltway politicians for the corporate contributors of their campaigns whose highest loyalty is to the bottom line of a balance sheet.

On behalf of these special interests, U.S. politicians made the People’s Republic of China the greatest manufacturing power on earth and halted the traditional annual rise in wages of our working men and women.

Beijing is now using the wealth compiled to build up their air, naval and missile forces to push us out of Asia and back across the Pacific.

Then there is the illegal invasion of America and Europe by the impoverished masses of the south, who have never before been fully assimilated into any Western nation.

Unrivaled since the last days of the Roman Empire, this invasion has Americans pleading for a security wall on their border, propelled Britain’s exit from the EU, and could yet cause a breakup of Europe.

What is at stake here? Ultimately, Western civilization.