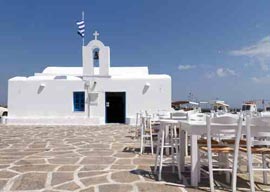 The wind is maddening and constant, and gets stronger as the sun falls under the horizon. The streets are lined with plastic and rubbish, the beaches covered with greasy bodies and sun beds, and ghastly music blasts away all day and night. Motor scooters without mufflers and cars choke the tiny roads leading to the center of town, where literally thousands of sunburned young people wearing expensive rags down tequilas with a thousand-mile look on their unshaven faces. Welcome to Mykonos, once a brothel of an island, now reverting to type after a 30-year period of being a gay paradise.

I am on a 125-foot schooner, the Aello, built in Hamburg, Germany, in 1921 by Max Oertz and commissioned by Anthony Benakis, a great Greek benefactor. She has been totally and perfectly refitted by her present proprietor, a Greek shipowner, and I have chartered her for a fortnight’s cruise with my son and grandchildren. The crew is splendid, all six Greek, who love to sail even under these stormlike conditions. Our one and only mistake was to come to this shit island, now overrun by nouveaux riches “cool” people, which means vulgarity like never before rules the roost. What is interesting is that average room rates for Mykonos hotels exceed those of luxury hotels in Monaco, the two hellholes I will never again get caught in as God is my witness. One of the crew went out to get rid of the rubbish and ordered a local beer from a shack. It was 20 euros, and the poor guy paid it instead of telling Ali Baba to shove it you-know-where.

“Once upon a time this was a magical island, with unblemished beaches, very clear water, and very few visitors. Then Jackie Kennedy Onassis visited the place and bought some local trinkets.”

Mind you, Paros was wonderful, with friendly locals and tasty food, and without Zulu music blasting throughout the night. I saw many friends, dined alfresco, and drank wonderful, chilled Greek white wine. As I write, I’m heading back there once my daughter and her hubby arrive to this modern Sodom. What makes this trip fun is the crew and its willingness to put up the sails and travel. I have many friends who have houses in Mykonos, but they use them like Fort Zinderneuf. They venture out only when absolutely necessary. Once upon a time this was a magical island, with unblemished beaches, very clear water, and very few visitors as Mykonos is 90 miles from Athens with an open sea in between. Then Jackie Kennedy Onassis visited the place and bought some local trinkets. In no time at all, every house turned into a boutique, and you know the rest. Building went into overdrive and houses sprouted like Muslim children in Manchester. It got so bad that the local authorities even had to install a traffic light in the middle of town. Boutique hotels dot the wretched place like Taliban outside Kabul, and large tourist boats disgorge thousands of Chinese daily, silent types who inspect the sinuous streets and myriad boutiques through their thick glasses, never buying and never smiling. Still, all visitors are welcome here, including some foreign types who rob the place blind at night. I know two families who have been robbed while asleep, which makes it obvious that professional thieves are working overtime but stealing only from Greeks and friends of Taki.

Further east, things are far worse. Since the beginning of the year, 110,000—1,000 per day—migrants have arrived via Turkey, that vile place ruled by the vilest pseudo-democrat on the planet. Greek islanders have tried their best to help those wretches, but how many bodies can one put into a lifeboat before it sinks? Bleeding hearts back in London can write the bullshit they write, but they should come over and see for themselves. A poor, craggy Aegean island can hardly feed its people but is now expected by the bleeding ones safely back home to do more. The clowns in Athens who govern the country are so amateurish and clueless, they didn’t even know that Greece had access to 500 million euros for just such a migrant emergency. A Brussels bureaucrat by the name of Vincent Cochetel, famous for having the tiniest willy in the world, has criticized Greece for not doing enough. “Wake up and do more,” said the bureaucrat while recovering from a penile extension operation. But how does one cope with such depravity as that of Cochetel? How can an island of 35,000 inhabitants take in 40,000 refugees and provide for them?

One Roger Cohen, a columnist for an unspeakable American paper, calls Europe a place without ideas. Calling unlawful immigrants a swarm has shocked, shocked Mr. Roger Cohen. He also deeply dislikes the Daily Mail. According to him, “it’s a trumpet of what’s worst in Britain.” Needless to say, Cohen shares his house with many migrants, in South Africa—where he comes from—in Britain, and in the United States. He calls Europeans small-minded, and we are. We never should have taken in a single refugee, starting with Cohen’s family, and if we hadn’t, he could at least get something right by calling Europeans small-minded. But I digress about a small man with even smaller and very predictable ideas. At least that Vincent Cochetel chap has the right to call small things bad names. Cohen is just lining up with the great and the good. He should come to Leros with his yacht and see the mess firsthand, then shut it for good.