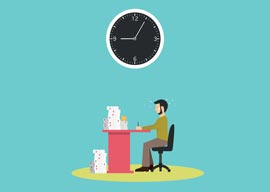 Jacques Chirac, when he was mayor of Paris, offered the municipal workers a deal: They could have a short workweek if in exchange they agreed to verification that they actually worked during those hours. The workers, or their leaders, rejected the offer with contumely, from which the most likely conclusion is that they were already working fewer hours than the mayor proposed, and wanted to keep this secret from the public. Other interpretations for their refusal are possible, of course, for example that the municipal workers were so imbued by public spirit that they wanted to work as many hours as possible for the common good; but this seems, prima facie, unlikely.

In any case, when it comes to the work of municipal and state bureaucrats, I am not altogether sure that I want them to work harder. They seem to get in the way quite enough as it is; to insist that they fill every minute of their time with activity is to court further useless paperwork and obstructionism.

There are, of course, workers in the public sector whom one wants to work hard: street cleaners, for example, rat catchers (a splendid group of public servants in my experience, really passionate about their work and deeply appreciative of the ways of rats), hospital porters, and so forth. But hardworking bureaucrats? I am uncertain.

“It is surely the common experience of most people that their efficiency declines as the number of hours they have worked grows greater.”

The first thing to note is that in many instances, activity is mistaken for work. Activity, in this context, may be defined as doing things for pay that one would not do unless paid to do them but which conduce to no useful end except filling time and giving the appearance of busyness to superiors. That is why bureaucrats don”t saunter down corridors, they scurry. And there is no doubt, I think, that an awful lot of what goes on in offices (and not just in the public sector) is activity in this technical sense rather than work. It is designed to give a false impression and to fill an existential void.

This wouldn”t matter very much if such activity were merely a form of bureaucratic masturbation, but alas, it is not so. Activity in my technical sense often has a knock-on effect, as it were, imposing obligations on people with real work to do, for example by devising new forms for them to fill in the course of their work, thus slowing them down. The information gathered on these forms is rather like old holiday snaps, never looked at again. But if bureaucrats are told to work even harder, they then indulge in what might be called meta-activity; in other words, they devise procedures to discover whether their previous procedures are being complied with. This becomes a labyrinth from which there is no extrication, the bourn from which no traveler returns.

But in any case the cult of long hours seems to me absurd. It is surely the common experience of most people (perhaps not quite all) that their efficiency declines as the number of hours they have worked grows greater. If you can do so much in an eight-hour day, it does not follow that you can do twice as much in a 16-hour day. Speaking for myself, I am at my best for about two hours a day”shortly after waking”and it is downhill all the way thereafter. The only thing that restores my efficiency or alertness to its previous level is the prospect, previously unexpected, of earning a good sum of money. This acts on my brain in the same way as amphetamine, though as with amphetamine the effect is not long-lasting and tiredness again supervenes.

In some professions, however, a willingness to devote one’s whole life, if not to work exactly, at least to presence in the office is a precondition of advancement, and an unwillingness to do so a sign of deficient ambition, that one is not composed of the right material. Young lawyers, for example, who aim for partnership are expected to examine documents and research precedents for hours on end, though (as I know from experience of medicolegal work) nothing is easier than to overlook the single key fact in a case in which there are hundreds or thousands of pages of dreary documents, each of which, though utterly dull, must be examined with full attention. As for the macho workers in finance, their absurdly long hours are a source of pride for them, a seeming justification for what they earn and an excuse for behaving badly once the pressure on them is relieved. Perhaps there would be fewer financial crises if financiers and their junior aspirants worked fewer hours.