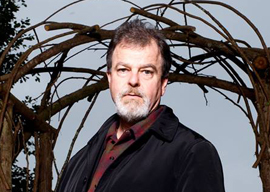 During his 61 years on this earth, Adam Parfrey was called a fascist, a commie, a Nazi, a misogynist, a right-wing conspiracy nut, a left-wing conspiracy nut, a satanist, a warmonger, and a peacenik. If there’s a divisive term, he was called it. The legendary independent publisher, who passed away last week following a massive stroke, was my friend of 27 years. He’s the reason I became a published author. He’s the reason I became friends with Jim Goad in the early 1990s. And, indirectly, he’s the reason I write for Takimag today. So a tribute column is certainly appropriate.

Adam was the last great indie book publisher in America. He founded his company, Feral House, in 1989, with a mandate to publish the things no one else would. The controversial stuff. The stuff guaranteed to piss off leftists, feminists, Muslims, and race hustlers, and also rightists, neocons, church ladies, and Jews. Adam’s been called “the most dangerous publisher in America” and “probably the most influential ‘underground’ publisher in post-millennial America.” And he was. But it’s easy to publish books that offend. Anyone can sell a two-bit public domain screed like the Protocols of Zion and become “dangerous.” What made Adam different was that he didn’t just publish “dangerous” books, he published good dangerous books. Unique dangerous books. Hell, the guy even published a book by “Unabomber” Ted Kaczynski.

And speaking of madmen, Adam had the business model of one. He’d publish ten books a year, and if two of them turned a decent profit, he could afford to put out eight that were potential money losers. You don’t become a millionaire with a plan like that. But you do become the kind of man whose death sends ripples throughout the independent publishing world.

“What made Adam different was that he didn’t just publish ‘dangerous’ books, he published good dangerous books.”

Without Parfrey and Feral House, we don’t get Tim Burton’s ‘Ed Wood,’ the ‘X-Files,’ or the upcoming television series about the sex magickian who helped send America to space. Chris Carter farmed the pages of Feral House books for the adventures of Mulder and Scully. ‘Ed Wood’ is based on a book Parfrey Published…. Since the mid 1980s—when he founded Amok Books—Parfrey had published books aimed at pointing out hypocrisies and inconsistencies in Western Civilization. He published the stories of subcultures considered so vile by the mainstream no other journalist dared touched them. From cannibalism, to Satanism, to a secret project to clone Jesus, there was no topic Parfrey and his writers wouldn’t tackle. He pushed free speech to its limits and never apologized. If you wanted to know what a white supremacist actually thought, not just what the news said they thought, you had to turn to places like Feral House and writers like Parfrey.

Now, you get that that’s Vice, right? “Current-year” Vice. SJW Vice. And they’re praising a guy who published white supremacists. Therein lies the Adam Parfrey mystique. Any one of Feral House’s books would be enough to get the average author or bookseller banned, shunned, kicked off social media, protested, picketed, and defamed. Yet Adam was respected across the ideological spectrum. He was lauded by the Huffington Post and dozens of left-leaning newspapers and weeklies, but he was also praised by National Review and Reason. Here’s a guy who could appear on the podcast of the staunchly alt-right Robert Stark, and the podcast of that most mainstream of comedians, Marc Maron (following Parfrey’s death, Maron reposted the episode, adding, “The books he published blew my mind”). #MeToo activist Asia Argento praised Parfrey as an “author and editor of forbidden knowledge,” regardless of the fact that some of his books would have gotten any other man tarred by the #MeToo crew as an enabler of “misogyny.” His releases were reviewed in major newspapers, and Hollywood continually looked toward his catalog for movie ideas.

How did the man do it? How did he manage to, for lack of a better term, get away with it? Well, for one thing, he was a nice guy. But when has that ever made a difference to the PC pit bulls? He was also somewhat of an “insider,” having been born into a showbiz family. But perhaps most important, Adam had integrity. He stood by what he published, and he never apologized. So he “got away with it” the same way Parker and Stone of South Park do. Produce solid work, and never apologize for it.

It also helped that Adam never gave off the vibe of an ideologue. But was he one? Was all the right-wing and satanist stuff just a goof? The “8/8/88” rally he helped organize, and his seeming promotion of “counterculture fascism,” was it all just for shock value? Adam was a hard guy to pin down. Yes, he loved playing around with “dangerous” ideas and imagery, but he also had well-thought-out opinions. For example, in a 2002 interview with music critic Mark Prindle, Adam spoke about race and immigration:

Personally, I find the Balkanization of the races here fascinating, but it truly is, at a wide-angle view, a very curious thing that no one can look at with honesty without being termed a racist or a neo-Nazi. Next spring I’m publishing a book version of a cholo gang magazine by one Reynaldo Berrios called ‘Mi Vida Loca.’ Reynaldo is all about “Aztlan”—the idea that brown-skinned people will retake North America from the honkies in any way possible. It occurred to me that this is not a good time to be light-skinned…. In any other era, a country that is overcome by immigrants of racial difference would have been called an “invasion.” I live in a Mexican gang neighborhood, gunfire every night. Many of the Mexicans who move here aren’t aware that we have flush toilets, so many deposit their babies’ shitty diapers in public places. What might happen when these people cannot get food stamps or welfare? What about a simple drought, or severe economic situation? Will everybody be nice and pleasant, and talk about Jennifer Lopez fondly? I don’t look forward to those times, but I do have front row seats to the apocalypse.

That, in a nutshell, was Adam Parfrey. He viewed things from a detached, amused perspective. And he loved publishing books that stirred the pot (like the one by the “Aztlan” hombre), even if they didn’t reflect his worldview. The man had no sacred cows.

Well, he had one. From a 2010 article in the Seattle Weekly:

Asked if there’s anything he’d draw the line at publishing, Parfrey quietly begins, “When I was in L.A., there was this Jewish guy I knew who went to Auschwitz under the pretense that he was doing Jewish studies, but really he was into the whole Holocaust-revisionist thing.” The son of a POW who hated all things German, Parfrey adds, “No, I’m not going to get into that world.”

You can probably guess the identity of that “Jewish guy.” On a personal level, Adam had no problem with revisionism. When the IHR’s Mark Weber and I appeared on The Montel Williams Show in 1992, Adam was right there in the audience to support us. He even gamed JDL golem Irv Rubin into admitting on camera that I had been assaulted during a speaking engagement at UCLA. But I knew that Holocaust revisionism was a topic he never wanted to bring into Feral House.