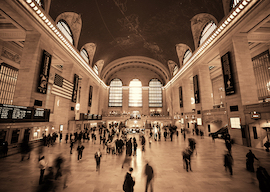 This is my last week in the Bagel and I’m going to give it the old college try. Two weeks without booze, ciggies, or ladies have made Taki a very dull boy. The next seven days—nights, rather—will decide.

The Bagel, of course, is not what it used to be, but then what is? I was recently looking at some grand Gotham landmarks, contemplating that they or I will not be around forever. I walked inside the San Remo on the West Side and was transported to a different era: high ceilings, thick walls, big windows, and lots of character. Only the wildest romantic would build Greek temples modeled after the monument of Lysistrata in Athens thirty stories up in the air. (They conceal twin water tanks.) From the turn of the last century until the 1929 stock market crash, most of the important apartment buildings were constructed in the beaux arts style. They look even more beautiful when compared with the glass horrors of today. The beaux arts and art deco styles continued up to the war, but then came the Bauhaus and the end of beauty and grace.

I suppose one always tends to look back when the bell for the last round goes off. Looking back is fun because one only remembers the good. Authority-defying gasbags were in short supply back then; the war had made everyone a patriot. The counterculture and the hippies were fifteen years away, the corrupt culture of Facebook sixty years in the distance. The Metropolitan Museum had not been debased and turned into a freak show by the social-climbing Anna Wintour, and Jeff (Errol Flynn) Bezos looked handsomer as DNA.

Train travel back then was romantic, and Grand Central conjured up the movie scenes of those classic meetings between soldiers and their sweethearts embracing beneath the great clock. It just wouldn’t be the same today in a lousy crowded airport full of security, would it? Yep, those were the powerful sounds and sights of childhood, the trains with names like ships, Empire Builder or Spirit of St. Louis. Penn Station was even grander than Grand Central, with more pillars, a vaster promenade, and long steps an emperor would pine for, but it always brought back sad memories of returning to boarding school. (A modern Nero named Moses knocked the place down in the ’60s.)

“Hangovers are a thing of the past, like standing up when a lady comes into the room.”

Another difference with the distant past was that no one I knew or came into contact with was starstruck then. In fact it was downright rude, certainly not done, to say things like “OMG” when coming across some celebrity. That was left to the so-called bobby-soxers, silly young women who screamed and fainted over singers like Sinatra or Perry Como. But those two, along with many others, were great singers carrying great tunes written by great songsmiths, not the crap one has to put up with today.

Yes, it was a seemingly less complicated time—a safer, more romantic, and more innocent time, as I keep repeating as nauseam. Mind you, every generation is regaled with grumbles about the downfall of grand cities, but it’s undeniable that certain charms of the ’50s are lost forever. Fewer skyscrapers blocked out the sun, leaving the streets brighter by day. Fifth and Park Avenues were pristine, and some of the best-dressed people walked there. Suits and hats for men, while women in furs and gloves completed the parade—a daily Easter parade, actually. I write this having just returned from a doctor’s office on Fifth. Everyone I saw on the street was small, fat, wearing a baseball cap, and horribly covered in bulky plastic windbreakers and mostly speaking Spanish.

And as far as entertainment is concerned, fuhgeddaboudit. Okay, the big-band era was over by the time I turned 21, but you still had the Persian Room at the Plaza, the El Morocco, the Stork, and the Cotillion Room at the Pierre. High society went out every night and tripped the light fantastic to starchy orchestras like Raoul Zequeira’s and Lester Lanin’s, or drank late into the dawn at the Blue Angel on Third Avenue and 55th Street. Television turned off around midnight, so people stayed out late looking for action at the Little Club or the Tender Trap. Until the mid-’60s it seemed as if every block uptown had some form of cabaret, and the young kept them in the chips.

Today the town at night is deader than the proverbial doornail, and the only action is downtown in loud, crowded places peopled by rappers, their whores, and their N-wording, gutter-talking entourages. There are more guns in downtown clubs nowadays than in speakeasies during Al Capone’s times in Chicago. One reads about shootings all the time, but they take place in faraway bars no one has ever heard of. Normal people stay home with Netflix or their texting contraptions, and hangovers are a thing of the past, like standing up when a lady comes into the room. Was the Manhattan I first lived in a beautiful illusion embellished by the innocence of youth? Not on your life. It was alive as illusions are alive, a fairy tale that Jan Morris captured in her Manhattan ’45 book, still No. 1 as far as I’m concerned, and one I lived in to the fullest. Now I’m quite happy to leave this Manhattan behind—adios, as they say on Fifth Avenue.