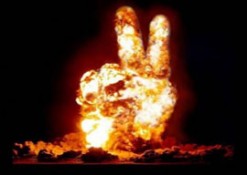 Last week, the Belgian magazine Knack published an article with the explosive title “Hitler was related to Somalis, Berbers and Jews.” The news involved a study conducted by journalist Jean-Paul Mulders and customs official Marc Vermereen, who claim to have taken DNA samples from 39 of Adolf Hitler’s relatives through such seemingly dubious sources as a discarded napkin, used cigarette butts, and envelopes from thirty-year-old letters. Several samples allegedly revealed genetic material peculiar to Ashkenazi Jews, Sephardic Jews, and African Berbers. The story quotes “a genetics expert” who says that “Hitler would not have been happy” with the test results.

Another article quotes Mulders as saying that the DNA samples he and Vermereen retrieved from Hitler’s purported relatives matched samples from “DNA of Hitler that we keep in a sealed, armoured chest.” If Mulders indeed said that, pardon me ever so much for thinking he’s a wee bit wacky.

The test subject who appears most closely related to Hitler was an Austrian cousin named “Norbert H.,” although it was not specified whether Mr. H. was a first or a fourteenth cousin. But even if he had been a first cousin and was not the direct product of inbreeding, someone not related to Hitler was also involved in creating Norbert’s DNA. I know nearly nothing about genetics, but at least I know that much.

Despite all this, and although the study’s results have not been independently verified, several major news outlets pounced joyously upon the story as if the matter had been settled beyond the shadow of a feather of a whisper of a twinkling of doubt. “New Research Shows That Hitler Had Jewish Roots,” bellowed the TIME magazine headline. One article declared that the Belgian study established an “irrefutable link” between Hitler and his Jewish ancestry.

Regardless of one’s feelings about Adolf Hitler”and it’s safe to assume that nearly everyone outside of the Islamic world feels negatively toward him”it’s difficult to deny that he has an enduring star power unmatched by anyone else from his generation. You could pull a dozen scruffy teenagers out of any graffiti-bombed skatepark in the USA, and it’s likely that very few of them would have an inkling of who Joe DiMaggio, Winston Churchill, or W. C. Fields were, but it’s hard to conceive that you”d find a single young soul who’s unaware of Hitler.

“The unmitigated barrage of information the public is force-fed about him is so uniform in its tone and so cartoonishly negative in its content, one wouldn”t exactly be crazy to suggest that it may be orchestrated to advance a specific ideological agenda, although one will automatically be labeled crazy merely for suggesting such a thing.”

What’s intergalactically ironic is the fact that it isn”t neo-Nazis who are primarily responsible for keeping Hitler’s memory alive, because at last count, slightly fewer than three dozen neo-Nazis still exist.

Winners write the history books, but Hitler didn”t win. The unmitigated barrage of information the public is force-fed about him is so uniform in its tone and so cartoonishly negative in its content, one wouldn”t exactly be crazy to suggest that it may be orchestrated to advance a specific ideological agenda, although one will automatically be labeled crazy merely for suggesting such a thing.

In a way, anyone who suggests such a thing is “crazy,” but not necessarily in the sense that they”re illogical. These days, for anyone to so much as hint that Hitler may not have been a Two-Dimensional Fire-Breathing Devil Monster is to risk one’s career, personal safety, and membership in the human race. It matters not whether you believe the very idea of “evil” is silly and primitive”if you don”t toe the party line about Hitler being evil incarnate, you”re almost certain to face a bloody social beatdown. Since most sane people want to remain safely inside the herd, risking such a thing is sheer craziness.
For better or worse, I”m crazy like that. The truth has always been insanely more important to me than social acceptance. One truism I stumbled upon accidentally is that the people who yammer most loudly about all living humans” fundamental equality never seem to count dead bodies equally, or they”d be far more vicious toward Stalin and Mao than they are toward Hitler.

Speculation that Hitler was Jewish is not new, nor are allegations that he had one testicle, was gay, conducted a prolonged sexual relationship with his niece, and could only reach orgasm when someone defecated on his face.

But whether true or false, the idea that Hitler was genetically Jewish is fascinating, at least to this here goy.

If true, it would constitute the most egregious example of guilt-projection in world history. If Hitler had African as well as Jewish genes, it would undermine the notion that Caucasians are uniquely disposed toward waging genocidal wars. If the Holocaust had been overseen by a crazed, mixed-race monster, some ne”er-do-wells might construe that as an argument against race-mixing. And perhaps most uncomfortably for the professional Hitler-haters, it would hammer home the idea that race is more than an imaginary “social construct” and can be quantified through DNA testing.

If false, the story instantly becomes even more fascinating to me. What is one to make of an emotional need to discredit Hitler that is so strong, one wades through used napkins, cigarette butts, and envelopes? Why the rush to judgment among the mainstream press? Why the rampaging urge to paint Hitler as a self-loathing hypocrite? Sixty-five years after his death, there are a lot of people who spare no effort to ensure that Hitler remains unhappy. They spend so much time defecating on his long-dead face, you’d think he was still a threat.

Such people are control freaks, just like der FÃ¼hrer.