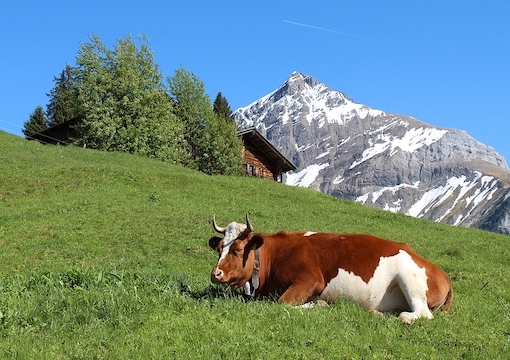 GSTAAD—A fin de saison feeling around here, but the restaurants are still full, the sons of the desert still moping around, building is going on nonstop, and the cows are down from the mountains making the village a friendlier and more civilized place. Something of a twilight mood has crept in, especially when I compare the cows to the people. Reclaiming vanished days is a sucker’s game, but it’s irresistible. I was up at my friend Mick Flick’s chalet the other afternoon, talking with Gstaad regulars about how much fun the place used to be. I tried the reverse of an old Woody Allen joke, announcing that taxis nowadays are so expensive I couldn’t keep my eyes on the lovely legs of the lady riding next to me. It went over like the proverbial lead balloon, but then we were all drunk to begin with.

Never mind. The fairer sex in Gstaad is mostly represented by ladies whose chief resource has always been their beaux. Some of them who haven’t received the seal of marriage can look a bit desperate, with bags under their eyes and a boozy roll at their waists. Their meters, in other words, are running, and we know that men keep their eyes firmly on those meters, in taxis or elsewhere. Until I got old, older women attracted me. They still do, and up at Mick’s the other afternoon, when asked by an old maiden whose youth had been a wild one where my wife Alexandra was, I told her that she was nine months pregnant and in bed. “Bravo, Taki,” was her response.

“Looking back, I sacrificed myself for women’s equality, stunting my tennis career and many other things I cannot recall at this moment.”

I suppose attraction to older women was inevitable after a little romance at 21 with the French wife of a Greek shipowner led to my banishment to Paris. That was some price to pay, Paris at 21—it actually traumatized me for life. Parisian society was open to young horny types because most men kept mistresses, and French wives accepted it but retaliated with young arrivals to the City of Lights. Looking back, I sacrificed myself for women’s equality, stunting my tennis career and many other things I cannot recall at this moment. Adultery is to French men what name-dropping is to Hollywood agents, as is the payback by their wives. Unlike, say, my mother, who would cross herself and pray my father wasn’t sinning (which he was, nonstop), French ladies remained good mothers and perfect hostesses, loved their hubbies and respected the institution of marriage, and had assignations with poor little Greek boys whenever possible.

That winter in Gstaad, it was déjà vu all over again. When one is 21 most women one meets at chic parties are older, hence the attraction for oldies, or so I’m told by my shrink whom I’ve never actually met or talked to. In fact the bum does not exist, but if he did, I’m sure that’s what he would say if I asked him why I still find older women attractive. Paris, Gstaad, Paris, the Riviera, then Paris again—that was the cycle, and what can I tell you, dear readers, it was shameful, sinful, and a waste of time, but oh so much fun. I wouldn’t change it for all the marching powder in Bolivia.

But enough of this nostalgia. They say one should live for the present, but present life can be awfully degrading. Mind you, military doctrine has it that lucky generals are preferable to good ones, and that applies to marriages also. I’ve been lucky as hell because Alexandra has put up with my shenanigans for 51 years because I’ve never taken anything seriously where the fairer sex is concerned, and have never preferred anyone to her. I have crushes all the time and chase skirts nonstop, but I’m a one-woman man, in fact I think I should get an award from some marriage bureau or something. And I don’t care what anyone tells says, a stable home is the best thing one can give children.

A happy family is as good as it gets, but I’ve also discovered another way for peace of mind and spirit: a total abstention from social media. About fifteen years or so ago, while writing for a New York weekly that eventually morphed into Takimag, I got a taste of the venom, hate, malice, and bile shown by the dregs of society if and when given the opportunity to display it. Unknowns would write in wishing people dead and telling the most egregious of untruths in order to make their sick point. Although I’ve been around more than most people, it was a first for me. I simply could not understand or believe how bitter and hateful people could be, especially when reading something they disagreed with, or, in my case, when I described a lifestyle they could never afford or imagine living.

Envy must be at its most painful when there’s nothing the envious one can do about it. I am not about to change the way I live or the things I believe in, so the envious ones will just have to live with it. Oh yes, I almost forgot. I did away with the right to respond unless the complaint was valid as was the aggrieved party. And I have never read or looked at anything online, have never communicated on social media, hence I’m a very happy man.