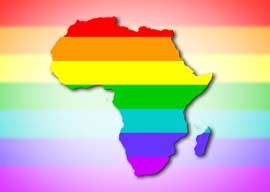 Last week President Barack Hussein Elijah Muhammad Obama visited his alcoholic deadbeat dad’s homeland of Kenya, where he found it incumbent upon himself to lecture the nation’s president for not being nice enough to gaybirds and lezzies.

At a press conference with Kenyan President Uhuru Kenyatta, Obama said that as a half-black American, he knew how painful it was to be treated differently and that Kenyans should stop causing pain for Kenyan homosexuals by treating them as if they were somehow, you know, different. Obama’s apparent goal is to see fit that everyone”no matter his, her, or its sexual orientation”experiences an equal level of pain.

In the most diplomatic manner imaginable, Kenyatta told Obama to go get fucked by a tree stump. He said his countrymen had more pressing concerns than gay rights, which he called a “non-issue.” He also implied that for Obama to meddle in Kenyan culture would be a fool’s errand: “It’s very difficult for us to impose on people that which they themselves do not accept.”

Compared to America, Kenya is highly impolite to homosexuals. The country makes it illegal to be either a faygele or a muff-diver, with potential penalties of up to 14 years in prison. According to a 2013 Pew Research Center study, a mere eight percent of Kenyans approve of homosexuality.

“Don’t you understand that not only is colonialism bad”it’s so bad that it gets worse once it stops?”

Still, that’s better than Senegal, where a piddling four percent of the populace approves of its citizens faggin’ off. It’s also better than Ghana (three percent) and Nigeria, where only one in 50 respondents said that people of the same sex taking off their clothes and touching one another’s private parts was OK in their book.

Africa has a reputation”many would say it’s well-deserved”of being uniquely unkind to the gays. Homosexual behavior is illegal in two-thirds of the continent’s 50-plus (it’s always changing) nations. Three African countries provide the death penalty for homosexuality and another three provide for life imprisonment. Many Africans condemn homosexuality for the mere fact that some of its practitioners EAT DA POO POO.

Why, it’s almost as if you can’t blink in Africa without hearing about lesbians dying of AIDS because they were gang-raped to cure them of lesbianism, about drag queens being decapitated, and about gay men being slashed with machetes and bludgeoned with hammers.

Every man who has sex with another man should be arrested.
“Former Kenyan Prime Minister Raila Odinga

[Homosexuals] behave worse than dogs and pigs….[Homosexuality is an] un-African…white disease….[It] destroys nations, apart from it being a filthy, filthy disease.
“Zimbabwean President Robert Mugabe

We will fight these vermins called homosexuals or gays the same way we are fighting malaria-causing mosquitoes, if not more aggressively….If you [practice homosexuality] here I will slit your throat “ if you are a man and want to marry another man in this country and we catch you, no one will ever set eyes on you again, and no white person can do anything about it….[T]his evil empire of homosexuals will also go down the dirty drain and garbage of hell.
“President Yahya Jammeh of The Gambia

They’re disgusting. What sort of people are they? I never knew what they were doing. I’ve been told recently that what they do is terrible. Disgusting.
“Ugandan President Yoweri Museveni

Same sex marriage is a disgrace to the nation and to God. When I was growing up, homosexuals could not stand in front of me, I would knock him out.
“South African President Jacob Zuma

Why do Africa’s homo-hatin’ homies take it to that other level?