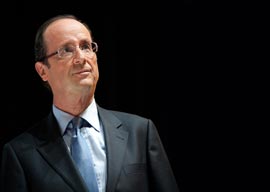 Credit where credit is due: President Hollande”who until then had never seemed Ã  la hauteur, as the French say, of his exalted position, appearing more like the deputy head of a lycÃ©e in Limoges than a head of state”made an excellent speech before both houses of the French parliament after the terrorist attacks of Nov. 13. It added, temporarily, cubits to his stature.

But one speech doesn”t make a policy; and one knew, of course, that the unanimity expressed by the standing ovation with which his speech was received could not last. Luckily, indeed, our countries are not given to lasting expressions of unanimity, the deliberate preservation of our peaceful divisions being what the struggle with Muslim fundamentalism is all about. The Muslim fundamentalists, like other would-be dictators, have a one-eyed or cyclopean view of what life is all about, and believe moreover that everyone else is blind. Their stupidity is matched only by their arrogance.

However, it does not follow from the fact that we are, as we should be, divided about many things that our governments” policies should be incoherent and vacillating. One of President Hollande’s promises in his speech was that French nationality would be withdrawn from convicted terrorists with dual nationality, French and other, even if they were born in France.

“Why should Muslims in France object to the law unless they were sympathetic to the terrorists who risked having their nationality withdrawn?”

No one could suppose that this measure would solve the terrorist problem, or even make a major contribution to its solution. A man who is prepared to blow himself up is not likely to be deterred from detonating himself, and for “every suicide bomber there must be many terrorists and organizers of terrorists who are not quite so keen on losing their lives, and for whom the threat of the withdrawal of their passport might be more serious, since they could then be deported to the country of their other nationality, and it seems that few Muslim fundamentalists brought up in the West want to live permanently in a Muslim country.

In the first flush of enthusiasm, no one opposed the proposed law (which required a constitutional change), until the government prepared to legislate it into actual existence. Then the opposition, principally among its own supporters, began in earnest. The proposed law was supported not only by the respectable parliamentary opposition, the Republicans of Nicolas Sarkozy, but by the Front National, the kind of party for which nobody knows anybody who votes, but which nevertheless gains about a quarter of the suffrages.

In the face of opposition by its own supporters, the government vacillated. Would it, or would it not, enact the provision? The minister of justice, Christiane Taubira, announced on a visit to Algeria that it would not, only for the prime minister, Manuel Valls, to announce immediately afterward that it would.

The opposition to the proposed law by the government’s own supporters was, as usual, phrased in the language of the highest abstraction and principle. The proposed law, it said, was an attack on the fundamental human rights for which the French Republic (give or take a genocide or two) had always stood. The law risked creating two categories of French citizen, those who might have their nationality withdrawn and those who might not. And in practice the law would inflame passions without contributing to national security.

The only sensible argument is the last of these, though the desire not to arouse passions can easily be taken to the point of appeasement. The law would clearly be of symbolic importance, even if it achieved little else. It seems to me not so much principled and scrupulous on these grounds to worry about the withdrawal of nationality of those who hold two nationalities”to one of which they have shown their enmity by their actions”but frivolous and decadent. There is one other slight objection to which I have seen no one draw attention: Although the law envisages the withdrawal of nationality only from those convicted of terrorism by a proper court, there is always the possibility of a miscarriage of justice, however conscientiously a case is tried. And to exile an innocent person would indeed be a serious fault. But fear of such fault cannot (in my judgment) be allowed to paralyze action in a matter so serious.