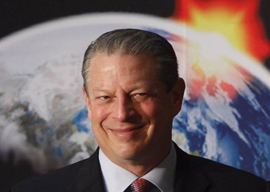 I see Al Gore’s been at the sauce again.

That was Big Al’s second excursion in August. Earlier in the month he took on global-warming deniers at an Aspen Institute forum in a startlingly vituperative manner. He cursed at the skeptics, employing the b***s*** word, the g**d**n word, and a word that rhymes with “trap.”

(I have asterisked there in deference to the tender sensibilities of Taki’s Mag readers, whom I know to be a genteel, delicate crowd.)

Why all the emotion? Either the Earth is getting warmer or it isn’t. If it is, that is either a good thing or a bad thing, or it’s a wash good/bad-wise. If the Earth is warming and this is demonstrably a bad thing, either we can do something about it or we can’t.

That the Earth is warming seems to me well-established. That this is a bad thing, I haven’t seen demonstrated. Some currently fertile areas might become dust bowls; but then, some currently uninhabitable areas, especially in the Arctic, will become cultivable. Perhaps it’s a wash.

“That the Earth is warming seems to me well-established. That this is a bad thing, I haven’t seen demonstrated.”

Al Gore is certain that global warming is a bad thing. A terrifically bad thing: “The very existence of our civilization is threatened.” If he’s right, we’d better do something. Since the Earth is very big and its climate hard to manipulate, the thing we’d better do would be a very, very big thing—the kind of thing only governments, perhaps only a single world government, could manage. We’re talking about something like war socialism, perhaps on a worldwide scale.

That is what gets up conservative noses: the suspicion that Al Gore and his fellow climate alarmists wish, on empirically dubious grounds, to impose war socialism and/or global government on us.

From what I know of Gore, I wouldn’t be surprised if that were so. The man is such a tangle of personality quirks, though, it’s hard to get a secure grip on his weirdness. There’s that whole business with his father, which must have psychoanalysts begging for Al’s patronage. Gore Sr. farmed tobacco, voted against the 1964 Civil Rights Act, and was chairman of a coal-mining firm; Gore Jr. rails against smoking, racism, and fossil-fuel emissions. Uh…

Whatever the case is with Al, there’s more to global-warming skeptics’ high emotions than hostility to war socialism or world government, worthy as those hostilities are. Just look at the comment thread on any global-warming article on a general-interest public-affairs website. There’s some kind of group territory-marking going on here: “If you don’t believe this, you’re not one of us!”

Climatology isn’t the only arena for this hot-blooded venting on scientific topics. There are three regions of the natural world in which results gathered and assessed systematically, according to scientific method, provoke strong emotional reactions from great masses of citizens. They are, in order of how long the reactions have been around:

1) The origin of species.

2) The roles of nature and nurture in forming human personalities.

Science tells us that:

1) Species evolve from other species, with natural selection playing a key role.

2) Some of the individual human personality is shaped by the individual genome. Some is shaped by life events from conception onward (i.e., including womb events). Of traits we can measure that are not obviously event-shaped (e.g., stunted height from severe malnutrition, lower intelligence from head injury), at least half the variation observed in any human group is shaped by the genome.

3) The Earth’s climate is variable. It is currently varying on an overall (several-year moving average) warming trend. Some part of this current trend is due to human activity.