Al Sharpton Is at It Again 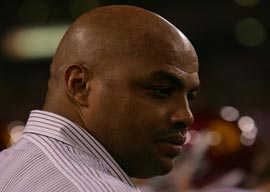 If I were a North Korean leader, or even an ISIS head chopper, I”d be reveling in the fact that a black American former basketball star spoke more plainly about race in America than any member of our political class or media.

Charles Barkley doesn”t mince his words. Many of his fellow blacks were not best pleased when he told young African-Americans a while ago to forget about basketball and stay in school. After Ferguson, Barkley did not join the race hustlers, liberal media, and the rest of the self-promoters inciting violence. Instead he said in a radio interview that there was no excuse to be out there burning cars and burning down people’s businesses. Bravo, Barkley, says Taki; here’s a great athlete who tells it like it is. He went on to point out that if it weren”t for the cops, “we would be living in the wild, wild West in our neighborhoods.”

Compare Barkley with the “Rev.” Al Sharpton”I use quotes for “reverend” because of the mind-warping distortion of the idea of reverence when applied to this hustler and criminal. A man who falsely accused innocent men of rape and profited in the ensuing publicity; one who led months of protest against a shop owner in Harlem, calling him a “white interloper”; someone whose rhetoric encouraged a black thug to shoot several customers and set fire to the place; and one who, after seven innocent people died, refused to apologize but went ahead to cheat on his taxes and stiff the IRS for millions in back taxes. This is the man who dines with Obama and advises him on race, not Charles Barkley. With leaders like Sharpton, is it any wonder that black America is in trouble?

“Race hustlers aside, the media have been the real enablers of hoodwinking the African-American community, along with our cowardly political elites.”

Race hustlers aside, the media have been the real enablers of hoodwinking the African-American community, along with our cowardly political elites. Portraying Michael Brown, the Ferguson career criminal, as a passive and innocent victim of a white trigger-happy cop is as slimy as journalism can get”slimiest of all being the New York Times, in its pompous, holier-than-thou approach to anyone wearing a uniform, especially where white cops are concerned. Leading the anti-white charge was a jerk by the name of Kristof, who banged on in five interminable rants about how whites don”t get it, and why a 13-year-old thug who needlessly shot a white mother three times in the face should now be let out because the victim has forgiven him and because he’s apologized to her. Right.

This is not journalism, it’s malpractice Ã  la Rolling Stone, purposefully misleading while trying to justify the agenda, whatever that may be. (I know what it is but let’s not go there.) And it gets far worse. I live part-time in New York, and looking at the NYPD daily crime blotter I fail to see a single white face among those caught on tape committing crimes against hardworking people. Times executives who live in expensive buildings with guards and doormen galore do not get held up while getting into their chauffeured limos on their way to work. Racist cops and a racist system suit the racial mischief makers while they”re busy misleading African-Americans.

And there’s money in it for them. Hucksters and victimhood-mongers are doing untold harm to the American social fabric. When a group like the Bronx Defenders have been paid $107 million by the city over the last seven years to represent poor defendants, it is not too surprising that they put out a video showing a black man holding a gun to a cop’s head while lyrics demand that “a cop got to get killed.” Very nice.

But even worse than Sharpton and the rest of the hustlers is the mayor of Noo Yawk, Bill de Blasio. This SOB went as far as to publicly remark after a riot that he had to teach his son, who is of mixed race, about the dangers he faced from the police. Instead of calming people down, this dick stirred up trouble, all in order to please the constituents who got him elected: blacks, Hispanics, and I suppose poor whites on welfare. The governor of New York has not done any better. He posed for a photo op with an ex-crack dealer billionaire whose lyrics vulgarly denounce women and cops and whose name is Jay Z. Bravo! Crime pays, in fact, because it’s the necessary initial step in advancing toward the American dream.