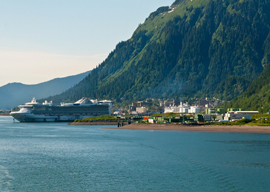 The Derbs”Mr., Mrs., and Missy”spent two weeks in Alaska. Here are some random observations.

Positively the last family vacation.  Most people who visit Alaska nowadays arrive on cruise ships, which seem to get bigger every time I see one. Juneau’s harbor is a cruise ship parking lot. There were five of the behemoths there when we flew in.

We weren”t on a cruise. Our primary purpose was to see Junior, who is stationed at Fort Richardson outside Anchorage. He only gets weekends off, and that not reliably. If the Army wants him on a weekend, they”ve got him. So we flew out for two weeks, Thursday to Thursday, encompassing two weekends to maximize the opportunity to see Junior, leaving weekdays for exploration elsewhere”Juneau, for instance.

The military gods were kind. Junior was free both weekends, so it was more or less a full-family vacation: probably our last, Mom and Dad told each other … although that’s what we said the previous two times.

“Good to be reminded that suicidal fanaticism didn”t come into the world in September 2001.”

WW2 on U.S. soil.  The battle of Attu in the Aleutians was the only WW2 battle fought on U.S. soil. I read it up in the Anchorage Visitor’s Center while the women were shopping for tchotchkes.

Good to be reminded that suicidal fanaticism didn”t come into the world in September 2001.

Only 33 years of living and I am to die here. I have no regrets. Banzai to the Emperor! … At 1800 took care of all the patients [in a field hospital] with grenades. Goodbye Taeki my beloved wife …

First Folk.  Alaska, like the rest of the U.S.A., is afflicted with the horrid blight of diversity, though not the usual kind. There aren”t many blacks, and the few I met were IWSBs from commerce or the military. I didn”t meet any Hispanics, though rumor has it the feds are shipping some of this latest tranche of Central American unaccompanied minors to Alaska.

No, this is the oldest style of American diversity: aborigines among whites. The aborigines in Alaska are Eskimos, of course (or whatever we”re supposed to say nowadays”don”t ask me). Seen in the streets of Anchorage, Fairbanks, and Juneau, they are a sorry lot: the men bleary-eyed and toothless, the women morbidly obese.

Are things better out in the boonies? Apparently not.

Endemic rape, sex trafficking and appalling levels of domestic violence: Why the US and Canadian Arctic is one of the world’s most dangerous places to be a woman.

Some 37 per cent of Alaskan women have experienced domestic violence.

Sexual violence is 12 times the US average while rape is four times.

A University of Quebec study found that alcohol abuse is endemic.

But hey, at least Alaska has some diversity!  Think how unbearable things would be without it.

Boxing the compass.  From Fairbanks we took a tour up to the Arctic Circle, just to say we”d been there.

Dad and Mom used to live on London’s Isle of Dogs, just across from Greenwich Park, where the famous observatory stands. We have a photograph somewhere of Mom standing astride the zero meridian. Well, now we have one of her astride the Arctic Circle.

Me: “OK, Honey, now we just have to collect the Antarctic Circle, the Tropics of Capricorn and Cancer, the Equator, and the International Date Line for a full set!” (Mom rolls eyes.)

Toyland.  Sitting in the restaurant on Douglas Island looking out through the window across the channel to Juneau, I watched the seaplanes taking off and landing (sea-ing?). They do so at the rate of one every few minutes.