All News Is Bad News 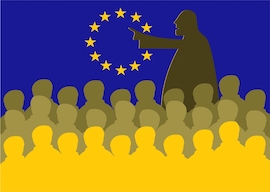 Hold the presses! More Germans trust Vladimir Putin’s Russia than Trump’s United States. This is earth-shattering news, a scoop like no other. If this were 1969 the moon landing would be a smaller headline. And guess who came up with the scoop: none other than The New York Times, the paper that first told us that there was no famine in the Soviet Union back in the 1930s. (Five million Ukrainians died, but the writer of the Times, Walter Duranty, got a Pulitzer.)

Europe used to be a very pleasant old place to visit and to live in. I know. I’ve lived in France, England, Greece, and Switzerland most of my life. We have old churches over here, some very old monuments, and we speak different languages. The Dutch have dikes and wooden shoes, the Venetians have streets full of water, and the Hungarians eat goulash. Greeks love the past because 2,500 years ago we were No. 1. Italians love their history because 2,000 years ago they were No. 1. The French adore their history because for a brief moment they were the top bananas, as were the British after them. No one ever conquered Russia because it was much too cold, although two men came close. The Serbian knights fought bravely for Christianity against the dreaded Muslims, the Hungarians rose up against the Soviet yoke in 1956, and of course the Battle of Lepanto ensured that Christianity would prevail in the old continent once and for all.

“In between having sex and eating fries a terrible monster grew.”

Until today, that is. Some seventy years ago, a Frenchman and a Belgian thought up an economic scheme to stop the Germans from overrunning the French every twenty years or so, and called it the European Economic Committee, or something like that. It was about France and Germany sharing their steel technology and other much too boring matters to list. Six European countries subscribed to the idea, and everything seemed hunky-dory for a time. Then the bureaucrats assigned to run this scheme got ambitious. With Uncle Sam—known as Uncle Sap to us insiders—shouldering the cost of keeping the Russian bear from poaching, the Europeans got very rich. The richer they got while Uncle Sap spent like there was no tomorrow, the more countries joined what is now known as the European Union. Some union. The Germans and the French ran the place out of Brussels, the capital of a made-up country inhabited by Dutch and French people to keep Germany from attacking France every couple of decades or so. The Belgian people like sex and french fries. All they do is have sex and eat fries. But in between having sex and eating fries a terrible monster grew, a dictatorship of the bureaucrats, faceless men and women who speak in a strange lingo and evoke democracy nonstop but who are as democratic as those democracies of Stalin, Hitler, and Mussolini.

Never mind, we’ve been through all that before; the main point of this story is that the Europeans are angry with Uncle Sam because he’s threatening to stop defending them unless they pay part of the cost. So they all call Trump names, terrible names, something that we sophisticated Euros cannot accept. The Yankees, after all, have come over twice to help us settle our differences, although I for one would not have minded if they hadn’t. We’d all be speaking German by now, and not the guttural Belgian that is half French and half Dutch.

America is a country in trouble, of course, what with a gay black actor faking a mugging by racist white folk, and women claiming rape when hard hats whistle (they get twenty years minimum for whistling twice, life in jail for a long wolf whistle). America is also in trouble when a Muslim woman goes over to Syria, gets married three or four times, is widowed three or four times, then wants to return and watch TV in Alabama. Even worse is the fact that an intellectual congresswoman called AOC wants to do away with airplane travel to save the planet and take away all of Jeff Bezos’ money. (Poor Jeff. Without money and with the kind of looks he has, he might get lucky with a female baboon, but not much else.)

Oh well, as if all that were not enough to trouble Uncle Sam, now we’re told that the Germans prefer Uncle Vlad to Uncle Don. The Europeans remind me of a recent mistress of mine: always demanding more money. But the Donald is no fool, except in his choice of son-in-law and friend in Saudi Arabia. If the Euros want protection they have to pay for it themselves. “Don’t you dare get out of Syria,” the Germans are telling the good uncle. In the meantime these Germans are the ones who let every man who has ever worn a towel on his head into Europe, the place now resembling Baghdad and Beirut much more than a European city ever did. If you don’t believe me, just go to any European train station and see for yourselves. They make Tijuana look like Stockholm before the Swedes joined the E.U. and turned into Beirut themselves.

This is the bad news. I have no good news for you this time.