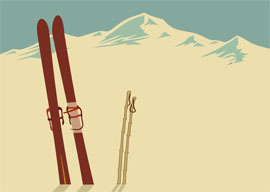 GSTAAD—Back in the good old days a funicular used to take skiers up, bucking all the way and at times stopping when the snowdrifts got too deep across the track. We used to wax our skis at every opportunity, deposit them in the baggage car, and ride the outdoor car. Most of us had a flask with good stuff in it, and once on top we’d push our laced-up boots into the toe irons and clamp them shut. We’d then wrap the long leather straps of the skis tight around the boot, and presto, we’d be ready to ski.

Skiing back then was an adventure, not just a saying. You had to put on lots of pullovers to ward off the cold, and top them off with a bulky ski jacket. Dressing alone took close to thirty minutes, what with long buttoned underwear, and lacing up boots was exercise in itself. Skiers made jump turns as the 2-meter-15-inch skis made of wood were resistant to curve, and woe to anyone falling forward. If the shin didn’t shatter, the ankle did, and then it was time for the meat wagon, as it was called. One crouched in order to be close to the ground for more control, and went straight whenever possible, sticks trailing behind. The snow was uneven and there were no bumps, or man-made moguls, as they’re called. Very few people skied. As I said, those were the good old days.

“Very few people skied. As I said, those were the good old days.”

Papa Hemingway came up to Gstaad sometime in the ’20s. He checked into the Rössli hotel, which is still here and retains the traditional feel of a Swiss alpine inn. There is a table reserved for the locals, who drink their beer and used to smoke their pipes before the health assholes of Brussels stopped it. The next morning Papa rose early and arranged for a guide, and the two walked up the Wassengrat on skins. It most likely took them two hours and a bit more to get to the top, where they had the lunch they had been carrying in their rucksacks: salami, cheese, bread, and a bottle of white wine between them. Papa must have also freely drunk from his flask, most likely a good brandy. They then skied down to town, probably taking about an hour. Then they called it a day. Papa got back to the hotel, had a drink or two at the restaurant, then went up to his room and began the first sentence of a book he had had in his mind for a long time. When it eventually appeared it was called A Farewell to Arms.

I think of Papa Hemingway all the time, but more so when I’m up here. His one-day ski trip reminds me of my youth, when skiing was hard to do and even harder to prepare for. Whether by instinct or design, or even luck, Hemingway as a young reporter frequented the small inns that dotted Europe, skiing (a non-sport at the time) and fishing, which were to seem true and lasting. At a young age he distrusted journalists, and he did write that “If you say nothing it is difficult for someone to get it wrong.” He obviously had not met today’s bunch, where making it up has replaced misquoting.

Good old Papa, I wonder what he’d make of today’s skiing scene. That’s why I think about him when I’m up here. The snowmaking machines, the short carbon-fiber skis that turn on a dime, the boots that need only one click to shut tighter than the exit from Hades, the man-made pistes, the down jackets that make one feel like he’s skiing in the tropics when it’s twenty below. The restaurants serving great country food on top of mountains, mountain peaks reached by cable cars traveling the speed of cars, the helicopter rescue teams that get the injured off the slope within minutes of being informed from the mobile telephone of the fallen skier. The safety strap one wears when skiing off piste that bing, bing, bings when the avalanche strikes, enabling the teams to find you before you asphyxiate. Knowing Papa as I do, he would call it girly stuff.