All in a Day’s Leave 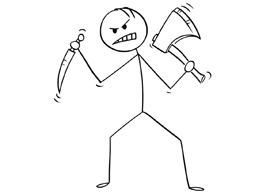 When it comes to murder, I am not a utilitarian; that is to say, I am against it even when the victim is an undesirable character and the world would be a slightly better place without him. I have noticed, however, that these days there is a tendency, at least in the British press, to canonize victims immediately, as if to be murdered were some kind of achievement or benevolent act, akin perhaps to a martyrdom for a cause.

The other day, for example, I saw reported the death by murder of a mother and child. The word angels featured prominently in both the story and in the headlines, but the pictures supplied did not suggest anything particularly angelic to me about the two victims. One was a young woman with a stupid tattoo on the inner side of her forearm, and if angels are tattooed, I don’t want to go to heaven. Surely this dreadful epidemic of self-mutilation cannot have spread even there?

The child who was murdered looked like a fairly typical British proto-slut, that is to say a little girl who by the age of 8 has been prematurely sexualized by our revolting popular culture and the negligence of her parents, if not with their actual connivance, and who at so tender an age wears an expression of hardened vulgarity; who, moreover, will come out of school at the age of 12 looking as if her dearest ambition is to be a cheap cocaine-addicted prostitute (or perhaps I should say sex worker) by the age of 15. She will be at one with the immortal words of one of my patients: “My mother calls me a slut, but I’m good at what I do.”

“There should have been no question of releasing Herman for twenty or thirty years.”

The fact is that the crime of murder inheres in the killing and not in the qualities of the victim. The idea that murder is particularly heinous if we can find nice things to say about the victim is unfortunately not the only confusion to which we seem increasingly prey. Quite often in Britain a murder is said to have taken place in the course of a robbery that went tragically wrong. If all had gone happily to plan, then, the victim would have been relieved of his property but would have escaped with his life, and there would have been nothing to worry about. When a drug-addicted lout beats an old lady to death in the course of a burglary, a police spokesman can always be found to denounce the murder to the press as having been cowardly, as if murder were a competitive sport in which the two sides ought to be more or less evenly matched, as if what was wrong with the murder were the same as what would be wrong with a boxing match between a heavy- and a flyweight.

We all say foolish things from time to time, but these recurring locutions seem to me to suggest moral confusions, and these moral confusions are not confined to Britain. Recently in Liège, in Belgium, a man aged 30 called Benjamin Herman stabbed two policemen to death, having first killed a student, and then had a shoot-out with the gun that he took from the dead policemen, severely injuring another policemen before he was shot dead.

There are no prizes for guessing what two words he shouted as he stabbed the two policemen. Suffice it to say they were not pax vobiscum. But it was the official response and commentary afterward that revealed the abyss into which we in Europe have fallen.

Herman was frequently described as a petty criminal. He had been a criminal all his adult life, from the age of 16. Even petty crime (shoplifting, say) carried out over so long a period is cumulatively less than petty, for it has a disturbing effect on the feeling of security in the area in which it takes place. But in fact Herman’s crimes included arson and armed robbery. He had been convicted several times for acts of violence. If this is all petty crime, what is serious crime?

All his prison sentences had been short, and it seems he never went long before being caught again, though almost certainly for only a small proportion of the crimes that he actually committed. He had just been let out for a day’s leave from prison when he killed his three victims, the government minister concerned reacting to criticism by saying that Herman’s release was all part of normal procedure (alas, there he was telling the truth, perhaps inadvertently) and that it is important that prisoners should not be caused despair by having their leave, intended to help them reintegrate themselves into society, canceled. Moreover, his previous periods of temporary release from prison had gone well.