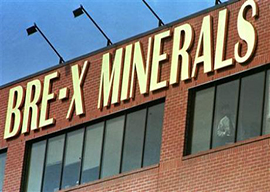 Last week I wrote about my memorable-albeit-disagreeable encounter with one Daniel C. Leghorn in Bemelman’s bar at New York’s Carlyle hotel. It was there where, fortified by a half-dozen Manhattans, the demented Leghorn had in a moment of confusion and madness mistaken me for a man called David Walsh (deceased), former CEO of a Canadian mining company, heaping all manner of curses on me.

In normal circumstances such a mistake would have been harmless enough, but by dint of my compelling resemblance to Walsh and old Leghorn’s wishy-washy mind, I was Walsh and as far as he was concerned, that made things very wrong indeed.

It was this same David Walsh who had founded a little company called Bre-X Minerals back in 1989 as a subsidiary of Bresea Resources Ltd. For four years nothing of note occurred until late in 1993 when, on the advice of exploration chief John Felderhof, the company acquired a property at the Busang River’s headwaters in Borneo’s jungles and took on a high-living Filipino geologist, Michael de Guzman, to map the ore body. De Guzman’s early estimates of the site suggested around two million ounces of gold. (In 1995 gold was trading at between $300 and $400 an ounce).

Sample after sample was sent off to the laboratories, with consistently spectacular results. By 1995 it was estimated that the site could contain as much as 30 million ounces. In April 1996, investment advisors Nesbitt Burns presented a resource estimate of 42.6 million ounces with an 18-month share target of $200. By year’s end, the estimate had risen to 60 million ounces.

“The incredible thing is that the Great and the Good were prepared to put their faith in drill results provided by a minuscule Calgary-based company that had never mined an ounce of gold in its life.”

With Bre-X being a small and inexperienced company, it didn”t take long for the vultures to start circling. While Placer Dome considered a takeover, Indonesia’s powerful President Suharto was adding political pressure by suggesting that Bre-X make a deal with Barrick Gold in association with a member of his family. In December 1996 a tentative joint proposal was drafted, but within weeks a fire broke out at Bre-X’s Busang office, destroying key documents. By now gold fever had gripped both shareholder and share price alike, and wild speculation was spreading about a deposit of up to 200 million ounces, making Bre-X (then capitalized at CAD $6 billion) as the century’s biggest gold find. Shares shifted like “pass the parcel” in a Belfast pub. Something was going to explode.

Finally a deal was negotiated with Freeport-McMoran Copper and Gold under which Freeport would run the mine and Bre-X would retain a 45% share. The announcement was made on February 17th, 1997, and Freeport immediately set about doing their due diligence.

One month later on March 19th, geologist Michael de Guzman died falling out of a helicopter while en route to the site. His body was found four days later, partly eaten by animals. Although identified by dental records and a thumbprint, doubts remained over whether it really was de Guzman. The dead man’s skin color was black (Guzman’s was not), a phenomenon the authorities curiously attributed to ant molestation. Adding to the conundrum, not one but four baffled and unsuspecting wives of differing religions turned up to bury their beloved and honest de Guzman.