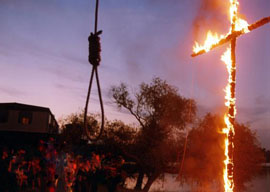 Last Friday, separate officials in Dubai and England intercepted packages containing bombs in the cargo sections of two USA-bound planes. Each bomb was deemed capable of demolishing the plane carrying it. A woman in the glorified national Islamic terrorist training camp called Yemen was arrested on suspicion of sending the packages. Each bomb’s explosive agent was the chemical PETN, the same compound used in the botched Islamic terrorist attack on a plane headed for Detroit last Christmas Day, only these bombs were said to be “ten times bigger” than the syringe-operated device that fizzled and scorched the scrotum of the failed Motown-bound jihadist elf.

Nine days before the cargo bombs were seized last Friday, NPR fired long-time senior news analyst Juan Williams for appearing on the Fox network and saying that he sometimes feels nervous when he sees people “in Muslim garb” on airplanes.

When he worked at the Washington Post in the early 1990s, the fact that several female staffers filed complaints accusing Williams of sexual harassment was not enough to get him fired.

At the height of the militia scare in 1995, Williams made the following comment on CNN’s Capital Gang:

You have angry white men here, sort of in their natural state, and you know, gone berserk.

Implying that the “natural state” of “angry white men” was to go “berserk” was still not enough to get Williams axed from the Washington Post nor banned from CNN.

This August, commenting on the passage of a Missouri ballot initiative aimed to thwart Obamacare, Williams blamed it on “an echo chamber of older white people.” His employers at NPR were not sufficiently offended to fire him for this, either.

Since he’s a black man, most Americans might find it reasonable for Williams to feel nervous around guys in full Klan regalia, despite the fact that wide-scale racist lynchings of blacks had virtually ceased in America around the time Williams was born in the mid-1950s.

On September 11, 2001, three planes hijacked by Muslim jihadists led to the deaths of nearly three thousand Americans. Throughout American history, it’s estimated that fewer than four thousand blacks were lynched. On a single day less than ten years ago, Muslims on American planes killed nearly three-quarters the aggregate total of blacks lynched throughout all of American history.

“All things considered,” as NPR is fond of saying, Juan Williams may have more imminent reason to fear Muslims on planes than he does angry white men going berserk out in the woods.

“The biggest and most obvious enemies Americans currently have are apparently now more precious in America than blacks are.”

But right now, we’re not dealing with a reasonable culture.

Because I hadn’t listened to NPR since, I don’t know, sophomore year in college or something, I decided to give it a fair hearing on my car radio as I wheeled around Atlanta running errands. The local affiliate’s announcers had the same opiated and nearly lobotomized tone in their voices that I remember from NPR’s hosts back in my college days. The network has a tendency to render the airwaves so lifeless, I seriously began wondering how many Americans die yearly from falling asleep while listening to NPR and driving.

I happened to catch the station during their fall pledge drive, and nearly everything you need to know about their target demographic can be summarized by the fact that the host said the cost of pledging to NPR was equal to sacrificing only a single lattÃ© daily.