Already Deep in the Politics of Hate 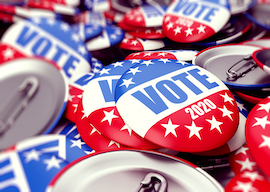 During an Iowa town hall last week, “Beto” O’Rourke, who had pledged to raise the level of national discourse, depicted President Donald Trump’s rhetoric as right out of Nazi Germany.

Trump “describes immigrants as ‘rapists’ and ‘criminals'” and as “‘animals’ and ‘an infestation,'” said Beto.

“Now, I might expect someone to describe another human being as ‘an infestation’ in the Third Reich. I would not expect it in the United States of America.” The crowd lustily cheered the analogy.

By week’s end, Beto’s Third Reich comparison had been matched in nastiness by Bernie Sanders’ description of the president to the cheering activists of Al Sharpton’s National Action Network:

“It gives me no pleasure to say this but today we have a president who is a racist, sexist, a homophobe, a xenophobe and a religious bigot.”

Sanders managed to appeal to almost all elements of the Democrats’ coalition by accusing Trump of hating blacks, women, gays, foreigners and Muslims.

Sanders’ outline of Trump calls to mind Hillary Clinton’s now-famous attack on the white working-class folks who would give Trump his victory:

“(Y)ou could put half of Trump’s supporters into what I call the basket of deplorables … racist, sexist, homophobic, xenophobic, Islamophobic — you name it … he has lifted them up.”

“Sanders managed to appeal to almost all elements of the Democrats’ coalition by accusing Trump of hating blacks, women, gays, foreigners and Muslims.”

If this is the level of discourse from Beto and Bernie, two of the leading candidates for the nomination, two years from Election Day, 2020 looks to be one of the ugliest campaigns in American history.

And what does it say about democracy if this is the character of politics at the highest level in the world’s leading democracy?

When such language is deployed without admonition from the major media, what does that say about the sincerity of the media’s calls to unite and heal the country?

And if Democratic leaders are openly massaging the hatreds of the party base with such slanders, what does it tell us about those leaders?

If they believe such charges — “It is the truth and we need to confront that,” said Sanders — why do Democrats not impeach and remove such a ogre? Why has Nancy Pelosi ruled that out?

At the end of a week where he withdrew his nominee to head Immigration and Customs Enforcement and saw the departure of his Secretary of Homeland Security, Trump, referring to the 175,000 migrants apprehended crossing the U.S. border in February and March, protested repeatedly, “Our country is full.”

“‘The echoes do indeed remind one of the Nazi period, unfortunately,’ John Connelly, a historian of modern Europe at the University of California at Berkeley, said in an interview with The Washington Post.

“‘The exact phrasing may be different, but the spirit is very similar. The concern about an ethnic, national people not having proper space — this is something you could definitely describe as parallel to the 1930s.’

“The president’s words became even more freighted when he repeated them on Saturday before the Republican Jewish coalition in Las Vegas, saying, ‘Our country is full, can’t come. I’m sorry.'”

Trump’s actions and words last week do seem to portend tougher action on illegal immigration, but one need not look to Nazi Germany for precedents. They may be found in our own history.

The 1924 immigration act restricted legal immigration into the U.S. and imposed ethnic quotas. That was American, not Nazi, law and was enforced by Presidents Coolidge, Hoover, FDR, Truman, Eisenhower and Kennedy.

Eisenhower, who led the Allies to victory over Germany, sent Gen. Joseph Swing to the U.S. border to remove a million people who had entered Texas illegally from Mexico, which the general proceeded to do.

Ike had crushed fascism and understood that securing the homeland against illegal mass migration is fascism only in the minds of those who have forgotten, if ever they knew, what a country is.

From his words and actions, Trump clearly senses that this may be the existential issue of his presidency: Can he secure the border against what seems to be an unstoppable invasion from the global south?

Nor is this only an American issue. In the capitals of Europe — Budapest, Berlin, Paris, Rome, London, Madrid — the gnawing fear is not of Vladimir Putin leading a mighty Russian army back to the Elbe to recreate Stalin’s empire, but of the African and Muslim hundreds of millions looking hungrily north to the pleasant lands of the former mother countries.