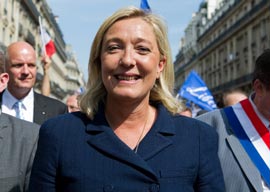 In Sunday’s first-round of regional elections in France, the clear and stunning winner was the National Front of Marine Le Pen.

Her party rolled up 30 percent of the vote, and came in first in 6 of 13 regions. Marine herself won 40 percent of her northeast district.

Despite tremendous and positive publicity from his presidential role in the Charlie Hebdo and Paris massacres and the climate summit, Francois Hollande’s Socialist Party ran third.

What drove the victory of the National Front?

According to The Wall Street Journal’s William Horobin, “Ms. Le Pen, who has combined the party’s anti-immigration stance with calls for hard-line security measures and tighter control of France’s borders, has only bolstered her support in the three weeks since the Paris attacks.”

The rightward shift in French politics is being replicated across Europe, as nations tighten borders and erect new checkpoints against the tsunami of migrants and refugees from Africa and the Middle East.

“Even the president is signaling a shift to the right.”

And the rightward shift is occurring here as well, propelled by the terrorist atrocity in San Bernardino. On immigration, terrorism, borders, crime and security, Americans are moving to the right.

Donald Trump has taken the toughest stance. He will send illegal immigrants back and make Mexico pay for his wall. He is the least restrained in what he would do to the Islamic State. And his lead nationally has now reached an unprecedented 20 points.

In Iowa, Sen. Ted Cruz is surging. Cruz would “carpet bomb [ISIS] into oblivion,” and try to make the sand around Raqqa “glow in the dark.” He charges Marco Rubio with collaborating with Sen. Chuck Schumer in backing amnesty for illegal immigrants.

In return, Rubio tears into Cruz daily, charging him with being soft on national security for having backed the USA Freedom Act that denies the NSA instant access to all phone and computer records of American citizens.

Like most Republicans, Cruz supported keeping NSA’s hands off the metadata of electronic communications of U.S. citizens. But that position seems more suited to the libertarian moment that has passed, not the national security moment we live in today.

Chris Christie says San Bernardino proves his point about keeping refugee wives and even 3-year-old orphans out of New Jersey. As we now know, that female terrorist may have been the radicalizer.

The Clintons have long been reliable weather vanes of national politics. And Hillary Clinton, too, has begun moving to the right. Sunday, she said she was ready to take “military action” if Iran fails to comply with the slightest provision of President Obama’s nuclear agreement.

She wants tech companies to start policing and shutting down Islamist websites that preach hate and may have radicalized the couple that carried out San Bernardino. Clinton added dismissively, “You are going to hear all the familiar complaints: ‘freedom of speech.’”