America: Hate It or Leave It 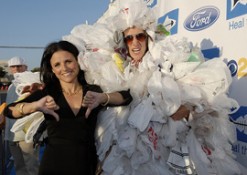 A wise old t-shirt once said, “If you don”t like this country, you should probably leave at some point.” Another, even wiser piece of clothing then added, “When injustice becomes law, rebellion becomes duty.” They”re both right. This country was built on rebellion and as an anti-racist, environmentalist, feminist, vegetarian, atheist, I am running out of things to patriotically rebel against. Half a century ago, when Marlon Brando answered, “Whaddya got?” to “What are you rebelling against?” there was a stupid rule begging to be broken everywhere you looked. Today, I ask America, “Whaddya got?” and it turns its front pockets inside out with an embarrassed shrug.

I discussed the lack of true racism last week so I’m going to go straight to the environment. Too much of American environmentalism is celebrities like Julia Louis-Dreyfus (who works with groups like Heal the Bay and The Nature Conservancy) delivering pearls of wisdom like, “Bringing your own mug to Starbucks is a possibility, although I must shake a finger at myself, because it is something that I very often forget to do.” Not exactly the stuff of super heroes.

Feminism in America is equally dull. Where the Middle East gets the oppressive burka, the best we can come up with is high heel shoes. I know they hurt and everything but the part where women adore the living shit out of them kind of takes the zing out of their oppression.

Then there are the Europeans and Canadians who are always telling me how “scary” America has become since the religious right took over. If that’s true why did David Kuo of the White House’s “Faith-Based and Community Initiatives” write a book railing on the president for treating Christianity as “naÃ¯ve and simplistic?” Atheists like Richard Dawkins aren”t rebels in America. They”re rock stars.

Maybe an animal rights activist could fill his To Do list without getting on a plane. Nope. They eat a lot of meat here but they do it relatively humanely and a dog’s life is at the point where punk rockers like Justin Theroux are doing PETA ads saying it’s unnatural to let your dog sleep outside. I want to rebel, not cuddle.

If rebellion is patriotic, then loving this country means hating it a little bit. And if you can”t muster up enough hate to at least make it a hobby, leave. So I”ve decided to spend $3,000 on a Round the World ticket and find something I can really sink my teeth into. Move over Doctors Without Borders. Make way for Anti-Racist Environmentalist Feminist Vegetarian Atheists Without Borders.

My first stop will be Malaysia. These guys are so racist they named their government The National Front! After rooting around in American subconscious ness for metaphorically institutional racism, I can finally enjoy railing against a racism that is literally institutionalized. In Malaysia it is against the law to hire an Indian over a Malays regardless of citizenship. That’s called Apartheid and nobody’s denying it. Malaysia is probably the most segregated country in the world with 94% of them agreeing their country is racist. Fighting prejudice here is going to be like shooting tapah in a barrel.

“Why so many so-called rebels are satisfied with staying here and fighting fake noose incidents, coffee cups, uncomfortable shoes, chilly dogs, and how raptors affect the rapture, I”ll never quite get.”

After freeing the Nelson Mandela of Malaysia, I”m going to head over to Central America to save the environment. In 1975, Olaf Wessberg was murdered in Costa Rica while fighting to create the Corcovado National Park. Locals wanted to sell the area for parts and didn”t like hippies telling them what to do. Today, the nearby province of Puntarenas spits on Olaf’s grave every time they dump their waste. This consists of driving a tugboat a quarter of a mile out and dumping it all in the Pacific Ocean. In your face, Elaine, you cunt. I”ve got the entire Golfo de Nicoya full of combs, flip-flops, old shoes, and broken toys (ironically, plastic bags do the least damage because they sink). These beaches are truly threatened and if you want to protect them, you better be carrying a gun.

Wait, can I take back that c-word? I forgot I”m a feminist. I”ve already bitched about how easy it is to find sexism in the Middle East so let’s travel outside the box on this one and head to Eastern Europe where the number of sexual slaves outnumbers all previous instances of slavery, combined. The numbers are difficult to calculate but range from a few hundred thousand to a global total in the millions. In places like Romania, these women have no identity, no passport, no ID, just a serial number tattooed on their arm like dispensable cattle. Picking cotton sucks but being raped several times a day with no other human contact takes sexism (and slavery) several light years past Dolly Parton’s 9 to 5 and into horror movie realms.

Speaking of eating out, leaving your bitch outside is not juicy enough animal cruelty to get me off so my next stop will be oriental. In China, it’s perfectly acceptable to cage dogs on top of sweltering hot apartment buildings their entire lives—then eat them. Even in the supposedly civilized and communist-free Taipei, it’s not unusual to see blood-soaked dogs driven mad with heat and confinement biting each other through their tiny cages. The Chinese believe: The more an animal suffers as it dies, the more delicious it is. You don”t know animal cruelty until you”ve seen a guy drag a two-legged dog down Zhongxiao Road like it isn”t even alive. No wonder the country has bred so many vegetarians.

After marching arm-in-arm with Chinese Buddhists and screaming at the carnivores, I”m going to satisfy my atheist appetite with a big hearty meal of religious fanaticism in Africa. As Nigeria’s Isaiah Oke explains in his eye-popping exposÃ© of Africa’s Ju Ju obsession Blood Secrets, “Everyone in Africa practices Ju Ju. Muslims and Christians may pray in their mosques and churches but behind closed doors, the Ju Ju tradition grows stronger every day.” The half a dozen or so abortion doctors American Christians have killed is all right and the gallons of innocent blood Islam has on its hands is OK but if you want to decry ridiculous fundamentalism, you can”t do much better than Ju Ju. Mistakes made in the name of god(s) are so prevalent throughout this continent, Hitchens” rapier sharp wit would be worn dull in by dusk. There’s the Ju Ju initiation of slitting a baby leopard’s throat and drinking its blood, plus South Africans dismembering albinos for the spiritual power of their limbs. And hey, what about the time a Ju Ju’s claim to make a Kenyan baby invincible was tested by locals shooting the baby? It didn’t go well. Oke describes a ceremony where they peeled off a white man’s skin in long strips until he bled to death to usurp the man’s Ju Ju. Then he gets into their three-day rituals which almost always lead to unwanted pregnancies and ultimately, babies abandoned in the jungle. And we thought Christians were weird for having dinosaur doubts.

So, goodbye, America. Fighting injustice here is a painfully pedantic plod I”m no longer prepared to suffer through. You”ve got stats and debates and PDFs disproving everything the other guy said. We”re down to minutiae. Travel a few miles outside our borders however and injustice becomes a Horn of Plenty where an activist’s wildest dreams are met with bad guys right out of the comic books. Why so many so-called rebels are satisfied with staying here and fighting fake noose incidents, coffee cups, uncomfortable shoes, chilly dogs, and how raptors affect the rapture, I”ll never quite get. Doctors Without Borders are insatiable, so why aren”t, say, the netroots? The answer is simple: Today’s activist’s are only pretending to be hungry.