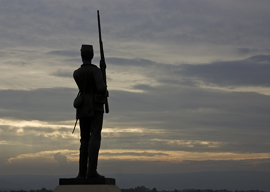 If, as many geniuses have believed, civilization depends on individual restraint, then in order to maintain restraint, we require certain outlets for the primordial feelings of anger, aggression, and resentment that we experience throughout the course of life. Premodern societies, with their frequent wars, provided more opportunities for discharging these impulses. By contrast, in our feeble, post-Christian country, anyone who is what used to be called a plain dealer—honest, frank, and direct—may be thought to have “anger management issues,” to engender “a hostile work environment,” to have “oppositional defiant disorder,” or God-knows-what. Therefore, although our therapeutic culture values nothing so much as the individual’s feelings, there is still a lot of repression as regards negative emotions.

That seems paradoxical, no doubt, for how querulous people are today. Yet the endless complaints reflect only a portion of the discontent, and moreover are a symptom of a primary desire to inflict suffering. Instead of such direct conflict, we have identity politics, which daily demonstrate “the pleasure of hating,” to borrow William Hazlitt’s phrase. Hatred, aggression, and resentment surface in the arts and academia and the media especially. It is prudent to be mindful that you are surrounded by people who, though all smiles and “nice to meet you,” would be happy to punch you in the face (or worse), but don’t because they fear the law and are cowards besides.

The wickedness has deep-seated sources. After all, after the sexual revolution, the pill, and no-fault divorce, many people simply no longer know how to make romantic relationships work. Thus, 40 to 50 percent of marriages end in divorce, while 40 percent of children are born out of wedlock. Although Americans have never been so free, they have ironically never been so lonely—another source of angst. The work situation, too, is a source of much malaise. The wise cultural stewardship called for by great men from Thomas Carlyle to Christopher Lasch has proved to be beyond the ability of all but a tiny fraction of men and women, although without it there is neither a state nor democracy, but only networks of business interests. People are egoists, so like the “good team members” of corporate America, our morality is often mere pretense. Politicians use lofty words to shamelessly manipulate citizens. Promises are made, but in practice jobs are sent overseas and go to Mexican illegal immigrants, while our leaders and their donors live proudly philistine lives. Finally, even many of us who have gainful employment remain unhappy. The hours are exceedingly long; the “can-do attitude” is wearisome; and the work itself produces things that are worse than useless.

“There are so many bad ideas, and such moral rot, that only war can rid us of the many pathologies that obviate culture and democracy alike.”

So, in short, we are in a bad way; so much so, it seems, that the manner in which people perceive reality is increasingly distorted—a kind of cultural sickness, as it were. Consider, for example, the uniquely wretched writer Daniel Johanson on the Lyric Opera of Chicago. On its website, the latter says:

We pride ourselves on bringing you diverse programming, and the 2018/19 Season is no exception. Verdi and Puccini in all their passion, elegant Handel and Mozart, romantic Massenet, mighty Strauss and Wagner—there’s no end to the riches that will make this season one to remember.

As if in self-parody, Johanson writes:

As a white man, there have been and continue to be countless times in which I have needed to recognize that privilege, white supremacy, homophobia, toxic masculinity, and gender normativity are layered issues. It’s easy to call a Nazi a racist because they are so obviously a racist. Not all racists are willing to take up that mantle.

Recognizing that Classical Music has implied White Supremacy for centuries is hard for those that study the art form.

The diversity of excellence is of no interest to a Last Man like Johanson. For him, there is an obvious moral evil in the fact that the programming (“White Supremacy”) contains no women and minorities. No matter that all the great composers have been white men. Johanson appears to think that merit is determined by race and gender, though of course he’d never object to the fact that only 18 percent of NBA players are white.

One wants to say to Johanson: “Why take up ‘that mantle’? If you value ‘diversity,’ why not simply appreciate the music of Duke Ellington, Charlie Parker, Sarah Vaughan, Etta James, and other women and ‘people of color’ along with the Great Dead White Men? Why such petty divisiveness? What good does it do you or anyone?”

Yet such questions would be fruitless. For Johanson, I submit, is in deep despair. A healthy-minded person certainly would not take his attitude to classical music. And having a base nature, Johanson deals with his condition by means of the would-be virtuous masochism we see above. “As a white man,” he says, and the phrase really means: “I loathe myself and I apologize for my existence.” If you are reading this and in need of someone to be an object of your altruism, you might reach out to Johanson. He may want you to whip him, slap him, spit on him, or some such thing.

Elsewhere Johanson tells us: “I am, no matter how hard I work against it, part of…[the] imperialist white-supremacist capitalist patriarchy. I just am.” And now ready to admonish, he declares: “While it can feel overwhelming to look inward on what is toxic white masculinity and how it manifests in the way you interact with women, or queer folks, or POC, or trans folks, or literally anyone, your actions stifle and shackle marginalized people every day.” For “there is no corner that toxic masculinity hasn’t pervaded. National, local, conservative, liberal, progressive, rich, poor, it’s the least common denominator. It’s part of my identity, and it’s part of the person I am now. That’s where I have to work from.”

Never in even his most misanthropic reflections on the degenerate character of the modern world did Nietzsche imagine a man as contemptible as Johanson, whose self-abasing type is now so common. You’d think that the fellow would have mercy on himself, or at least on us, and commit suicide. But that is unlikely to happen, because, however unhealthy, there is some vitality in a perspective that beholds enemies virtually everywhere. A person who has a boring and unsatisfying job, as Johanson may, gets a kind of forward drive from his “mantle.” He allies himself to fellow vulgarians, who feel much solidarity as together they stew in tepid baths of resentment. “Scratch my back, nonbinary.” “Why, thank you, blue-haired queer! It is very pleasant, our resistance.”

There are now a great many Americans like Johanson, people whose perceptions are perverted by the paucity of value that marks our time. It is important to understand how this works. First, we must realize that the bad elements of our nature (envy, hatred, greed, and other vices) are not less essential than the good ones. Indeed, the latter are not even intelligible without the former. Second, we need to understand how our internal state determines our misperceptions of the external world (even if we aren’t aware of it, as often happens). This is not difficult to grasp. Surely we have all had the experience of being in a bad mood, with the result that our perception—and so, our understanding and reaction—of something is significantly influenced by how we feel. We overreact, and only later do we recognize that and make a reasonable judgment. Meanwhile, however reluctant we may be to consider it, a perhaps necessary function has taken place: We have discharged a certain affect, whose origin had nothing to do with the object, so now we can get on with the rest of life.