America Says ‘No!’ to a Beltway War 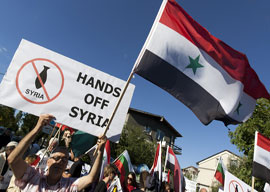 Last week, hell came to the tiny Christian village of Maaloula where they still speak Aramaic, the language of Jesus.

“Rebels of the Free Syrian Army launched an assault aided by a suicide bomber from Jabhat al-Nusra,” the al-Qaida-linked Islamic terrorist group, writes the Washington Post.

The AP picked up the story:

One resident said bearded rebels shouting “God is great!” attacked Christian homes and churches. “They shot and killed people. … I saw three bodies lying in the middle of a street.”

Maaloula is now a “ghost town.” Christians left behind were told, “Either you convert to Islam or you will be beheaded.”

“Where is President Obama?” wailed a refugee. And, indeed, where is Obama?

“The American people do not want war on Syria, and such a war makes no sense.”

He is out lobbying Congress for authority to attack the Syrian army that defended Maaloula as John McCain beats the drums for a Senate resolution to have the U.S. military “change the momentum” of the war to the rebels who terrorized the convent nuns of Maaloula.

If we strike Syria and break its army, what happens to 2 million Syrian Christians? Does anyone care?

Do the Saudis who have signed on to Obama’s war—but decline to fight—care? Conversion to Christianity is a capital offense in Riyadh.

Do the Turks, who look the other way as jihadist killers cross their frontier to set up al-Qaida sanctuaries in northern Syria, care?

Do the Israelis, who have instructed AIPAC to get Congress back in line behind a war Americans do not want to fight, care about those 100,000 dead Syrians and 400 gassed children?

Peggy Noonan writes that the debate on war on Syria “looks like a fight between the country and Washington.”

She nails it. The Washington Post, Wall Street Journal and Weekly Standard are all up for air strikes. In the think tanks of D.C., the corridor talk is all about “On to Teheran!”