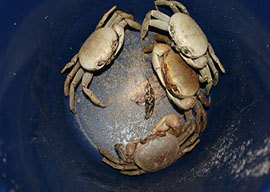 No matter how soothing the White House overtures to business leaders sounded this week, an inconvenient fact remains: Washington is gripped by crab-in-the-bucket syndrome. And there’s no cure in sight.

Put a single crab in an uncovered bucket, and it will find a way to climb up and out on its own. Put a dozen crabs in a bucket, and 11 will fight with all their might to pull down the striver who attempts escape. President Obama sought to reassure 20 CEOs that he wasn’t the king crab holding them down: “I want to dispel any notion we want to inhibit your success,” he cooed. “We want to be boosters because when you do well, America does well.”

Take it all with a huge grain of sea salt.

This is, after all, the same “booster” who in April mused openly about limits on profits, government determinations for what constitutes a “good” product or service, and the expectation that private businesses serve a collective need to goose Washington’s jobs numbers. “I mean, I do think at a certain point you’ve made enough money,” the president said. “But, you know, part of the American way is, you know, you can just keep on making it if you’re providing a good product or providing good service. We don’t want people to stop, ah, fulfilling the core responsibilities of the financial system to help grow our economy.”

Our Founding Fathers had quite a different view of “the American way,” of course. In 1816, Thomas Jefferson wrote: “To take from one, because it is thought his own industry and that of his fathers has acquired too much, in order to spare to others, who, or whose fathers, have not exercised equal industry and skill, is to violate arbitrarily the first principle of association, the guarantee to everyone the free exercise of his industry and the fruits acquired by it.”

But like a success inhibitor injected into the body politic, Obama’s policies have only served to suppress growth, punish ambition and discourage profit-maximizers. He has railed against “fat cats” on Wall Street while protecting his favored financial industry benefactors. He threatened to “kick” the “a**es” of oil industry executives while refusing to punish the scientific lies and distortions of his own job-killing environmental czars and bureaucrats. He inveighed against the U.S. Chamber of Commerce for collecting dues from international affiliates while ignoring the same practices among deep-pocketed unions. And he bemoaned tax relief for “millionaires and billionaires” that would actually benefit wealth-producing couples who annually earn more than $250,000 and individuals who earn $200,000 or more.

“While Obama, the olive-branch poseur, has called for a restoration of “civility” in Washington and liberal elites whine and whinny about the need for “no labels,” class-warfare demagoguery has metastasized unchecked.”

Most small-business owners will tell you they don’t want Obama “boosting” them. They just want him to get out of the way. But none of them was represented at his CEO shindig. Instead, among the business “leaders” the White House invited was billionaire Penny Pritzker—a Chicago crony, Democratic fundraiser/bundler and heiress whose family co-owned a failed subprime specialty bank.

While Obama, the olive-branch poseur, has called for a restoration of “civility” in Washington and liberal elites whine and whinny about the need for “no labels,” class-warfare demagoguery has metastasized unchecked.

Socialist Bernie Sanders took to the Senate floor to filibuster tax relief for all Americans last week in a ponderous, eight-and-a-half-hour harangue against “greed,” the “rich,” “richer” and “richest,” and “millionaires and billionaires” he had the audacity to liken to “bandits.” On the House side, N.Y. Democratic Rep. Joe Crowley attacked the GOP as the party of the wealthy and compared all people who earn more than $250,000 a year to the late convicted tax evader Leona Helmsley and her Maltese doggie heir.

The left wastes no opportunity to blame tea party and talk radio rhetoric for violent acts by lone nuts. But when a suspected serial arsonist (still on the loose) burns down expensive homes in an upscale Cape Cod neighborhood and spray-paints “f**k the rich” graffiti at the crime scenes, the “words-have-consequences” crowd is nowhere to be found. Such is the silence of the crabs.