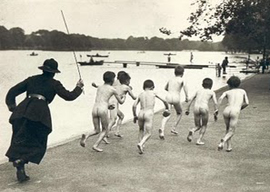 As the herds of wildebeest migrate in October and November, when the short rains come, from the grasslands of the Masai Mara to the breeding grounds of the Ngorongoro Serengetti, so do herds of American nouveaux-riches load up their near-adolescent brats in the SUV for an autumn tour of New England to “look at”  boarding schools.

To stretch the metaphor further, the object of the migration, whether understood or not, serves a similar purpose for both man and beast.  For the wildebeest the trek breaks the dependence of the yearling on its mother’s udder and sorts out the weak and the infirm.  The Mara river crocodiles and the big cats of the plains do the culling.

For the human child, boarding school tears the little horror from its nanny’s apron strings and introduces the child to the rigors of a kind of upper-class boot camp.

At least that is what used to happen.  The male, single-sex boarding school in America, like St. Paul’s and Groton, was founded on the English model. Eton, Harrow and Rugby are the principal examples.  The English aristos created these “public” schools because the alternative was “private” education at home, in many cases the stately home, with tutors and servants calling the young monster “master.”

When the Empire consisted of a quarter of the world’s population and a fifth of its land mass the English ruling class knew that they needed a cadre of vigorous young men to administer it in corners of the world where the location and the situation were often far from comfortable.

There’s coeducation, hence fornication and drug use, a predominance of Asian students, homo/lesbo clubs, and political correctness to beat the band.

Dr. Arnold of Rugby said (circa 1850) that the mission of the public school was to instill “firstly, religious and moral principles; secondly, gentlemanly conduct; thirdly, intellectual ability.”

It is said that the prospect of prison was never daunting to a man who had been to a proper English public school.