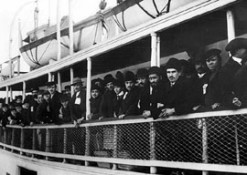 In the congressional debates on the 1924 Immigration Act, Rep. William N. Vaile of Colorado, one of the most prominent immigration restrictionists, had this to say:

Let me emphasize here that the restrictionists of Congress do not claim that the “Nordic” race, or even the Anglo-Saxon race, is the best race in the world. Let us concede, in all fairness that the Czech is a more sturdy laborer … that the Jew is the best businessman in the world, and that the Italian has … a spiritual exaltation and an artistic creative sense which the Nordic rarely attains. Nordics need not be vain about their own qualifications. It well behooves them to be humble.

What we do claim is that the northern European and particularly Anglo-Saxons made this country. Oh, yes; the others helped. But … [t]hey came to this country because it was already made as an Anglo-Saxon commonwealth. They added to it, they often enriched it, but they did not make it, and they have not yet greatly changed it.

We are determined that they shall not … It is a good country. It suits us. And what we assert is that we are not going to surrender it to somebody else or allow other people, no matter what their merits, to make it something different. If there is any changing to be done, we will do it ourselves.

After forty years of high immigration a great many Americans believed, like Congressman Vaile, that a continuation of the trend would remake the nation into “something different” from what was familiar and agreeable to them. Not wishing this to happen, they made their feelings known to their federal representatives, who accordingly drafted and passed the 1924 Act. The Act severely limited immigrant numbers and distributed them by quotas based on the ethnic composition of the republic in the 1890 census. It excluded nonwhites—Asians and Africans—from settlement altogether; although, oddly from today’s point of view, allowed unlimited settlement from Latin America.

Congressman Vaile’s language grossly violates modern protocols of course. That is not his fault; and taken at face value, with an understanding of the times, the notions he expresses are humane and sensible. They put the lie to arguments—I heard one in conversation just the other day—that the only motive driving the 1924 restrictionists was a determination to keep out inferior peoples. Plainly Rep. Vaile did not believe Czechs, Jews and Italians to be inferior to “Nordics.” He thought they were fine people: but they had their own countries, and we had our own country, and to go on permitting them to move from there to here in great numbers would change our country more than we wished it changed. Perhaps they would be more usefully employed in changing their own countries, if those countries were so unsatisfactory to them.

Nor was it the case that the sentiment for Asian Exclusion was driven by ideas of white superiority. Rather the contrary, as Kevin MacDonald notes in Chapter 7 of The Culture of Critique:

The strongest sentiment in play in those 1924 debates seems to have been a desire that the ethnic balance of the country be left alone, even if this meant excluding clever and industrious people. This desire was still widespread forty years later; or at least, Senator Edward Kennedy assumed it was when, moving the 1965 Immigration Act, he told the chamber:

Under the proposed bill, the present level of immigration remains substantially the same … Secondly, the ethnic mix of this country will not be upset …

After 1965 the nation soon fell in thrall to the ideology of diversity, possibly the most reality-defying mass delusion ever to afflict a free people. A quick check with any day’s newspapers will confirm that large populations of different ethnies when mixed together produce nothing but trouble. This fact, as obvious as the daily rising of the sun, was somehow mislaid in late-20th-century America.

Could it be that this phase of our history is coming to a close? It seems to me that in the recent arguments over Arizona’s immigration law and the Ground Zero mosque, I detect a whiff of diversity fatigue. Could it be that the mindset of Congressman Vaile is still to be found, in quantity, among the American public? A mindset not of racial superiority or privilege, still less of “hate,” but of satisfaction with one’s country the way it is, with the ethnic balance it has, and a reluctance to countenance the indefinite continuation of headlong demographic change?

Yesterday I got lost near the railroad station of a nearby town, Hicksville. I stopped people to ask directions to the street I wanted. It took four or five tries before I found someone who could both (a) understand me, and (b) reply in plain English. This was not the teeming slums of a port city, or some adobe outpost in the southwastern desert: this was a provincial town in Long Island.

Then this evening I saw Katie Couric on TV saying: “We cannot let fear and rage tear down the towers of our core American values.”

Is massive, never-ending demographic change a “core American value”? Might objections to the Ground Zero mosque—the topic exercising Ms. Couric’s absurd grandiloquence—be inspired by something other than “fear” and “rage”? Perhaps by the beliefs that this is a good country; that it suits us; and that we are not going to surrender it to somebody else or allow other people, no matter what their merits, to make it something different?